446. The Christmas Star by Ace Collins 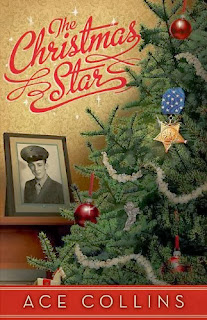 The Christmas Star by Ace Collins

"Robert Reed gave his life for his country in the early days of World War II. His sacrifice was honored when his widow and son were presented with the Congressional Medal of Honor. At Christmas, the final decoration Marge Reed hangs on the family’s tree is that medal. Rather than being a symbol of honor for young Jimmy Reed that shining star represents loss, pain, and suffering.

Yet a message delivered by one of Robert’s fellow soldiers and a mystery letter found in a Bible put a father’s sacrifice and faith into perspective and bring new meaning to not just the star hanging on the Christmas tree but the events of the very first Christmas. Then, when least expected, a Christmas miracle turns a final bit of holiday sadness into a joy that Jimmy has never known."

Received an unsolicited review copy from the publisher.

I received a surprise review copy of this last year but it was too late to read it for Christmas.  It's not exactly my type of book, but it did have elements I like and I do like Christian fiction when it's good so I put it aside to try for this Christmas.  I didn't really expect much as I've never heard of the author before and the publisher's blurb did sound a bit sappy, but the historical era, and the coming of age story did intrigue.  I was very pleased to find myself quickly several chapters into the book before I even took a breather.  The writing is very good.  The book is decidedly Christian but not preachy or tiresomely evangelical (I'm Catholic).  I found the story realistic as a 16 year-old boy tries to deal with the death of his Marine father during the war.  He heads down the wrong road and the story became darker than I'd expected it to, which is a good thing in my books.  My only problem is the book had been entirely believable and should have ended without the last three pages, these final pages bring about a happy, sweet, sugar-coated ending that is not believable and in my opinion undoes all the purpose for the growing and lessons learned by the main character throughout the book.  Otherwise a good Christmas read and I'm going to save it in my box of Christmas books to share with guests on future Christmases.
Labels: 2012 chrisitan Christmas historical fiction WWII