436. A Stubborn Sweetness and Other Stories for the Christmas Season by Katherine Paterson 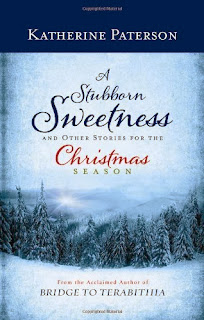 "This compilation includes stories of real-life people such as a shopping mall's night watchman, a lonely widower, a pregnant teenage runaway, a political prisoner in China, a grieving mother, and a privileged American, who have forgotten the true meaning of Christmas because of loss, pain, greed or circumstances. Through unexpected and uplifting ways, each is reminded of the first Christmas story and the vision of hope and peace it offers the world. They realize that even in the darkness, the light and song of Christmas can be seen and heard.

This heart-warming gift book, filled with stories of real people finding hope, courage, and faith amidst life's circumstances, radiates the spirit of the season and reminds each of us what Christmas truly means. Originally written to be read during her church's Christmas Eve service, this collection of holiday stories is perfect for individuals, families, and churches to read and share during the season."

Received an egalley for review from Netgalley.

Paterson's husband is a minister and these are stories she wrote to be read on Christmas Eve in her Church over the years.  They have all been previously published in various collections, but are all gathered together here in one place for the first time.  These are sweet, gentle stories that pull at the heart-strings, some a little too hard.  Paterson is a wonderful writer so I found all the stories readable, many of them were just too soppy and sugar-coated for my tastes.  Almost, but not all, do make mention of Christ and these are generally decidedly Christian stories.  Though there are a couple with just a general Christmas theme.  The stories averaged out to 3.5* but the book in general is more of a 3 for me.  People who will get the most out of the book, enjoy it most, will be those who attend a church with a minister/pastor who has a wife and small family.

After browsing through the stories again now, regardless of how I rated them when I read them, the ones that stay with me are: Merit Badges, Broken Windows and my Name is Joseph.

1. Exultate Jubilate (1995) - A typical Christmas grump of a Dad who decides not to attend Church with the family this year and while home alone a mysterious stranger arrives.  The stranger invites himself in and they end up with Mozart's Kyrie on the stereo and the Dad has a change of heart about the spirit of Christmas.  A tender story. (3/5)

2. Star Lady (1995) - A story about bringing the love and joy of God to the old and poor no matter how poor you are yourself.  Is a nice story with a heartfelt message but gets rather mixed up with the second message the author is trying to tell.  The second message is that irreverent happy clappy churches are much more "fun" than traditional churches which revere and worship the trinity with adoration.  The old lady and I are quite happy with our choir singing "Alleluia"s thank you very much. (2.5/5)

3. In the Desert, a Highway (1995) - Lovely story.  Set on the cusp of the Cultural Revolution in China, an old man saves a woman's life and she says she will do anything for him. He comes to her that night confessing to be a Christian and so she begins to read his Bible to the illiterate man.  This is an act punishable by death if they were ever caught.  Eventually they end up in a re-education camp and the Sacred Word brings them each peace in different way.  Touching! (4/5)

4. On the Night of His Birth: Mary's Story (1985) - Just a few pages long, a lovely story to read on Christmas.  Mary is awake and musing on her new born babe and the circumstances in which she finds herself.  (4/5)

5. Angels and Other Strangers (1979) - A white woman stuck in a snow storm on Christmas Eve is helped by a black man.  She is afraid of him, thinking he may have bad motives but her little boy thinks he is an angel.  (3/5)

6. Merit Badges (1995) - A girl scout gets "bushwhacked" into visiting a senior at a nursing home during the Christmas season.  She ends up liking her old lady but the two of them run into a problem when the rules say that minors are not allowed to visit unchaperoned.  A very sweet story about the meaning of joy.  (4/5)

7. Guests (1979) - Same simple, lovely quality story as most of the others here.  A pastor in WWII Japan is alone, his secret congregation has diminished to none, his wife and children killed by allied bombs.  Then that next Christmas he celebrates the service alone and halfway through a little Korean girl (Koreans were brought over as slave workers by the Japanese) sneaks in and he introduces her to the King. (3/5)

8. Watchman, Tell Us of the Night (1995) - A night security watchman out of the habit of prayer because of the downward trend of his circumstances prays for a miracle while working Christmas Eve.  He learns first hand that Christmas really is about Jesus.  Another sweet story. (3/5)

9. Why the Chimes Almost Rang (19??) - A little girl tries to make something really special happen on Christmas Eve at Church but knows nothing like that is bound to happen for real when she stumbles upon a homeless woman and her little boy stealing food from the food closet for the needy.  Quite moving and my favourite in the collection so far.  (5/5)

10. Broken Windows (1979) - This one is a cut above the others in being more than just sweet it manages to have a sincere message.  An aging pastor is having a hard time writing his Christmas Eve sermon which he wants to base Psalm 51:17 "The sacrifices of God are a broken spirit, A broken and a contrite heart, These, O God, You will not despise." He ends up meeting a very poor mother and children and having a revelation about the words of the creed "he descended into hell".  Well written. (5/5)

11. My Name Is Joseph (1995) - A tribal member from high in the hills tells his story from boyhood in the mountains of Central America in a village with a Catholic Priest.  Joseph (Jose)'s life story takes him many places with many feelings towards God and faith until eventually his life is comparable to the Holy Family's as a network of nuns and priests smuggles his family and pregnant wife through Mexico across the US border.  A reminder of the Christ child's birth.  Eloquent. (5/5)

12. Woodrow Kennington Works Practically a Miracle (1979) -  Another nice quaint story.  A five year old is hard put out when a new baby comes home.  The older brother, twelve, is very accepting but sets out to help the young sister adjust.  She goes from one extreme of being bad-tempered to overly religious until there first Christmas Eve with the baby, when she learns the love of family. (4/5)

13. No Room in the Inn (1995) - I just keep saying the stories are lovely at this point and this one is as well.  Country folks in a diner during a storm just before Christmas are worried about Armenians suffering through an earthquake they've just heard about on the news but they are so caught up in their own selves they miss the people most in need right upon their own doorstep. (4/5)

14. The Handmaid of the Lord (1995) - I can't say I liked this one.  Some people may find it sweet and charming but I'm more cynical.  A little girl feels badly done to this whole year that her new baby brother is born, she's minister's daughter, 3rd of 4 children and doesn't have a good New Testament name like the others.  She's upset at God, moans and whines, and wants a big part in the pageant.  Doesn't get it of course, then something happens and she has to fill in and she's filled with righteousness at the end.  Blah!  (2/5)

15. A Stubborn Sweetness (1995) - A soppy story story of an embittered dying father and his alienated son both finding their way back to God.  Meh. (2.5/5)
Labels: 2013 christian Christmas short stories