425. The Unwanteds: Island of Fire by Lisa McMann 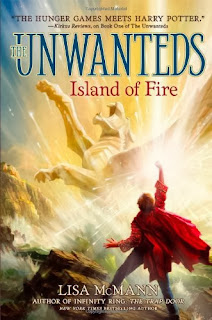 Island of Fire by Lisa McMann.
The Unwanteds (Book 3)

"The magical world of Artimé is gone. The Unwanteds have no food, no water, and no hope. And everyone is looking to Alex Stowe for answers.

Overwhelmed and feeling totally helpless, Alex knows it’s up to him to find a way to restore Artimé, rescue his captive friends, and free Megan from her voice-stealing necklace of thorns—three impossible tasks. But could help lie with the silent, orange-eyed newcomers?

Meanwhile, Alex’s twin brother Aaron continues to build his army in the stark land of Quill, preparing for the ultimate showdown with the Unwanteds. But a shocking twist reveals that Alex and Aaron share a common enemy more dangerous than either could have imagined..."

I'm really enjoying this dystopian series that brings magic to the table making it more of a fantasy than science fiction.  Most of McMann's books are firmly aimed at teens, but The Unwanteds is her foray into upper elementary and she writes just as well for this age group.  The plot is quite intricate and I can't say much without giving away plot points from this story or the previous books, however this one picks up exactly where the last one finished off and it is essential to read the books in order.  Island of Fire concentrates mostly on the Artime half of Quill (the magic side) and reveals the answers to some secrets but only leaves the characters with more questions.  Their world (consisting of two islands at this point) is opened up to include a third, just as mysterious and unusual as the other.  A great compelling read!  The series' Facebook page claims this is going to be a seven book series! Much more to my tastes than the Harry Potter books ever were, but this will appeal to fans of those books.
Labels: 2013 dystopia fantasy MG