414. Practice to Deceive by Ann Rule 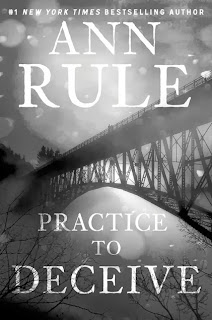 Practice to Deceive by Ann Rule.

"In Practice to Deceive, her first book-length investigative chronicle since In the Still of the Night, Rule unravels a shattering case of Christmastime murder off the coast of Washington State—presented with the clarity, authority, and emotional depth that Rule’s readers expect. It’s a case with enough drama, greed, sex, and scandal to be called “The Real Housewives of Whidbey Island,” but this was not reality television. This was murder: pure, cruel, ugly, and senseless. And someone had to pay the price.

Nestled in Puget Sound, Whidbey Island is a gem of the Pacific Northwest; accessible only by ferry and the soaring Deception Pass Bridge, it is known for its artistic communities and stunning natural beauty. Life there is low-key, insular, and the island’s year-round residents tend to know one another’s business. But when the blooddrenched body of Russel Douglas was discovered the day after Christmas in his SUV in a hidden driveway near Whidbey’s most exclusive mansions, the whole island was shocked. A single bullet between his eyes was the cause of death, but no one could imagine who among them could plot such a devious, cold-blooded crime. At first, police suspected suicide, tragically common at the height of the holiday season. But when they found no gun in or near the SUV, Russel’s manner of death became homicide. Like a cast of characters from a classic mystery novel, a host of Whidbey residents fell under suspicion.

Brenna Douglas was Russel’s estranged and soon-to-be-ex wife, who allowed him to come home for a Christmas visit with their children. The couple owned the popular Just B’s salon. Brenna’s good friend Peggy Sue Thomas worked there, and Brenna complained often to her that Russel was physically and emotionally abusive. Peggy Sue’s own life has been one of extremes. Married three times, hers is a rags-to-riches-and-back-again tale in which she’s played many roles: aircraft mechanic, basketball coach, the “drop-dead gorgeous” beauty queen as a former Ms. Washington, Las Vegas limousine driver, million-dollar horse breeder, wealthy divorcée. But in 2003, her love affair with married guitarist Jim Huden led the two Whidbey Island natives to pursue their ultimate dreams of wealth and privilege—even at the expense of human life."

What a tangled story of tragedy and crime this was!  Not exactly what one expects from Rule, no tale of a serial killer or a brutal mass slaying or even an horrific crime of passion.  Here we have an assassination style style murder of a regular Joe that took ten years to solve.  The victim was an ordinary guy, loved by most, lead a normal life and hardly anyone had anything to say against him.  Unfortunately, because of this we don't get to know much about him; the book is most certainly about the weird, tangled lives of the killer (s). Rule's investigative reporting uncovers a trail of tragedy for the Stackhouse family beginning with the brutal rape and murder of the mother of six young children and ending with the devious connivings of a step-daughter of that family decades later.  The book reads like a novel and was quite the page turner.  I don't usually read this type of crime preferring the ones I mentioned at the beginning, but there were just so many twists and turns with this investigation, and the lives of the people involved in the crime were so soap-opera like that if it weren't real it would hardly be believable in a novel.  I'd never heard of this case before, so I had the added advantage of not knowing how things were going to turn out, causing an element of suspense.  I love Rule's writing.  She tells these true crime tales so well, with respect to the victims and their families and though this is not one of her best books it is an incredible read of a tangled web that left authorities frustrated for an entire decade.
Labels: 2013 non-fiction true crime