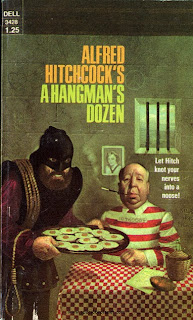 "Swing and sway the Alfie way! There's nothing that Alfred Hitchcock likes better than a gentle summer breeze - if there are a few hanging bodies swinging in it. It's not that Alfie likes punishment, you understand. But usually where there's punishment, there's a crime to be found, and now Alfie wants to show you what fiendish fun the best of crimes can be as he digs into his treasure trove of gruesome goodies to unearth 15 of his very favorite terror tales."

The book opens with a short introductory essay purportedly by Alfred Hitchcock and each story is introduced in a short eerie blurb also supposedly by Hitchcock.  And so we feel as if the great man himself is leading us through this collection of stories he has perhaps picked especially for us.  It is quite a varied collection with some masters of the short story mixed with some unknowns.  A couple of real gems are mixed in here with the OK and a couple of duds, but overall a decent enough satisfying collection of eerie tales of murder, mayhem and perhaps something not quite of this world.

1. Bomb #14 by Jack Ritchie (1957) - A quick story of the police capturing a serial bomber whose 14th bomb has just killed the two bomb experts there to diffuse it.  Pretty obvious what is going to happen from the start but readable.  (3/5)

3. The Children of Noah by Richard Matheson (1957) -  I've only read few stories by this author and this has left me with a taste for more!  This is not a mystery but more what would be called a horror story of a man who enters a town population 67 and gets pulled over for speeding.  Things get scarier from there ... (4/5)

4. An Attractive Family by Robert Arthur (1957) - Ha!  This was a good mystery.  The final solution was a little far-fetched but it was a well written piece nonetheless.  A family of three: mother, son and uncle are plotting their third murder. (4/5)

5. Let the Sucker Beware by Charles Einstein (1958) - This isn't a mystery either, more of a morality tale with a twist ending that starts with the O. Henry quote, "In the West a sucker is born every minute; but in New York they appear in chunks of roe ...".  Quite short and rather boring.  Writing isn't bad, though. (2/5)

6. Fair Game by John Cortez (1957) - Six stories in and this is the best story so far.  Really enjoyed this!  A tale of slow-mounting suspense.  A local man is hired by a rich man and his young wife to be his guide while he goes deer hunting, all of them staying in the woods in a cabin for the season.  Something is going to happen right from the beginning and you never quite know what as the story becomes more intense until the unexpected ending.  (5/5)

7. The Curious Facts Preceding My Execution by Richard Stark (1960) - A man describes all the things that happened on the day he kills his wife.  Pretty boring. (1/5)

8. Your Witness by Helen Nielsen (1958) - Typical tale of the shyster lawyer who gets his in the end.  Predictable but readable. (2/5)

9. Blackout by Richard Denning (1961) - Decent little thriller of a drunk man who enters the police station and admits to a homicide.  Checking into his story brings about several twists (3/5)

10. The October Game by Ray Bradbury (1948) - This is a freaky little horror story about a man who wants to hurt his wife as much as he possibly can, murder and divorce are both too quick and the pain wouldn't last long enough, no, he wants her to suffer. (5/5)

12. The Last Escape by Jay Street (1960) - An escape artist magician wants to do the water escape trick and finally talks his agent into letting him do it.  The magician and his wife have not been getting along well lately.  It is fairly easy to guess what is going to happen but the author pulls out a nice, startling twist at the end that leaves you with a chill.  (4/5)

13. Not a Laughing Matter by Evan Hunter (1958) - Decent little piece of a down and out, once famous, now ex-drunk, actor who gets a short bit part and plans the murder of the manager.  A nifty realization comes at the end.  (3/5)

14. Most Agreeably Poisoned by Fletcher Flora (1957) - A lover's triangle results in a game of Russian roulette with poisoned glasses of port.  A sophisticated, yet dull, battle of words. (2.5/5)

15. The Best-Friend Murder by Donald E. Westlake (1959) - Nice finish to this collection.  I've always enjoyed a Westlake short.  A college student runs from the dorm admitting that he's just killed his best friend and fellow aspiring writer.  But even with a body, report from the examiner and a signed confession Detective Levine feels there is something strange about this case and works a few extra hours on his own to see what's up. (4/5)
Labels: 1962 anthology crime horror mysteries short stories