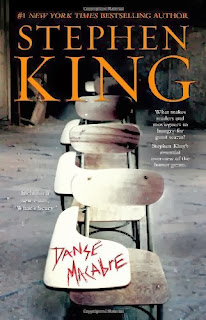 "From the author of dozens of #1 New York Times bestsellers and the creator of many unforgettable movies comes a vivid, intelligent, and nostalgic journey through three decades of horror as experienced through the eyes of the most popular writer in the genre. In 1981, years before he sat down to tackle On Writing, Stephen King decided to address the topic of what makes horror horrifying and what makes terror terrifying. Here, in ten brilliantly written chapters, King delivers one colorful observation after another about the great stories, books, and films that comprise the horror genre—from Frankenstein and Dracula to The Exorcist, The Twilight Zone, and Earth vs. The Flying Saucers.

I'm re-reading Stephen King's books in chronological order and this was the next book in line.  I can now tell exactly how old I was when I originally read his books because this was the first one I bought (well was gifted) brand new from the bookstore.  Every July (my bday) and Christmas my dad would give me any new Stephen King books that had come out as presents; so I was 13 when I got this one.  I was really looking forward to this, King's first foray into non-fiction, as my first read of it had been soooo enlightening.  I wanted to get my hands on every book he mentioned, watch every movie he named but it being pre-internet days that was a very hard task indeed.  Now that I re-read the book thirty years later I find that I've watched a great many of the mentioned movies and the major books listed but not all of them so I still had some titles and authors to add to my tbr.

It's a great book and so interesting to read.  Parts of the book are biographical telling about young Steve's life as a kid when he connected with this world of the macabre, but mostly it is his treatise on the horror story genre and what it includes both the good and the bad.  The movie section was enjoyable but my favourite part was the longest section: on books, of course.  Steve has a great writing voice and it's like taking to someone about a topic you both love over a couple of beers.  The only part that was disappointing was the section on TV.  The book shows its age here, written in 1981, King is writing from an era of Mork & Mindy, The Dukes of Hazzard and Fantasy Island to name a few.  King has no use for television whatsoever, feeling that all who lower themselves to its level, actors, directors, writers are entering an abyss of no return.  He does manage to tell about a few gems, in his opinion, and he recommends such as Outer Limits and Dark Shadows.  The book was written over quite a period of time which shows as when he first starts the book he mentions his own books: . Carrie, 'Salem's Lot, The Shining (and the corresponding movies), further on Night Shift and The Stand and towards book's end The Dead Zone is mentioned once.  He had also of course published Firestarter by the time this book was on the shelves.

Since his opinions and views of television are so outdated from now, where horror is a staple on the tube with King even being behind some ventures himself (Kingdom Hospital),  I would sincerely love a follow-up to this book.  Two ideas I have Uncle Steve, if you are listening: 1) continue with another book following the same theme horror movies, TV, books from the 80s to the 2010's. or 2) A new book just on horror and TV where King can expound on the very short chapter he included in this book and then go on to talk about what happened with horror on TV after the sitcom driven slump of the 80s up to the present.  Why was Buffy a big hit in the 90s? Why is Walking Dead so hot today?  Great book for the history of the genre but really worthy of a modern follow-up since there is so much more to say when his opinions are rooted in the eighties.
Labels: 1981 books about books film industry horror nonfiction television