402. Help For the Haunted by John Searles 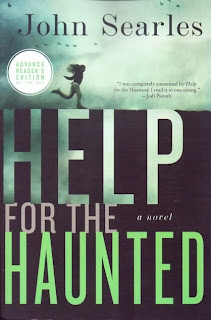 Help For the Haunted by John Searles

"It begins with a call one snowy February night. Lying in her bed, young Sylvie Mason overhears her parents on the phone across the hall. This is not the first late-night call they have received, since her mother and father have an uncommon occupation: helping "haunted souls" find peace. And yet something in Sylvie senses that this call is different from the others, especially when they are lured to the old church on the outskirts of town. Once there, her parents disappear, one after the other, behind the church's red door, leaving Sylvie alone in the car. Not long after, she drifts off to sleep, only to wake to the sound of gunfire.

As the story weaves back and forth through the years leading up to that night and the months following, the ever-inquisitive Sylvie searches for answers and uncovers secrets that have haunted her family for years.

Capturing the vivid eeriness of Stephen King's works and the quirky tenderness of John Irving's novels, Help for the Haunted is told in the captivating voice of a young heroine who is determined to discover the truth about what happened on that winter night."

Received a review copy from the publisher.

Oh my!  This book had me spellbound.  I was glued to my seat reading late into the night with this one!  Just because of the title I thought at first it was going to be a ghost story but no, no, no this is an intense psychological suspense which held me in its grip right until the very end.  I just couldn't believe who the killer ended up being, I was so shocked but then part of me was like, "Oh, wow!  That makes so much sense."  There had been clues and when I had finished I immediately had an impulse to start all over again to see if I could find them.  Now that I knew what to look for, LOL.  I don't often feel like re-reading a mystery.  I just loved everything about it: the setting, the characters, the doll, the paranormal topic.  I have read sooo many books this year but this is one of my favourites of the year, especially, for a mystery; it deals with so many unique topics and it stays creepy from beginning to end.  Loved it!  Wonder if Searles' other books are anywhere near this good?
Labels: 2013 mysteries suspense thriller