381. Thor: The Viking God of Thunder by Graeme Davis 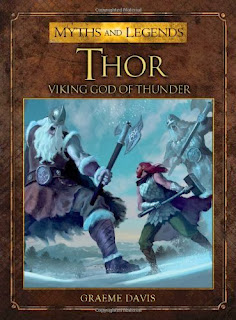 Thor: The Viking God of Thunder by Graeme Davis. Illustrated by Miguel Coimbra.
Myths and Legends, 5

"In the stories of the ancient Vikings, Thor is a warrior without equal, who wields his mighty hammer in battles against trolls, giants, and dragons. He is the god of storms and thunder, who rides to war in a chariot pulled by goats, and who is fated to fall in battle with the Midgard Serpent during Ragnarok, the end of all things. This book collects the greatest myths and legends of the thunder god, while also explaining their historical context and their place in the greater Norse mythology. It also covers the history of Thor as a legendary figure, how he was viewed by different cultures from the Romans to the Nazis, and how he endures today as a popular heroic figure."

I really enjoyed this!  I'm somewhat familiar with Norse Legends having read several collections over the years but knew nothing of the history of the worship and religion attached to the Vikings themselves.  I found this very entertaining.  The book is informational in content and starts out with historical information on Thor as a god of Viking religion and where the myths and legends we know today came from.  Then the main part of the book is a retelling of those myths which concern Thor.  They are not told in a storyteller's voice but keep to the main points while still managing to be entertaining.  Throughout this section, blocks of text are highlighted to bring historical context, definitions of customs and words, etc.  Finally the book ends with a look at Thor after the Vikings to modern day; his use as a legendary hero figure, his symbolisms confiscated by the Nazis and of course, the Marvel Superhero.  Very informational and entertaining!  I did however think that the illustrations by Coimbra, which are lovely, were superfluous, as there are plenty of images of artwork and relics from the ages; pictures of actual Viking stonework, children's book illustrations, etc.  The book is unassuming in appearance, and brief but the text is somewhat academic and I'd say the intended audience is senior highschool if not even adult.
Labels: 2013 history myths non-fiction YA