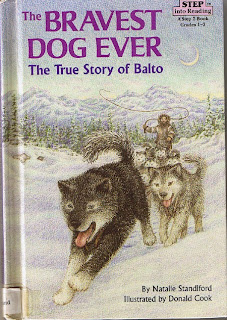 363. The Bravest Dog Ever: The True Story of Balto by Natalie Standiford. Illustrated by Donald Cook.

"Balto has a quiet life as a sled dog - until tragedy strikes. Dozens of children in Nome become sick with diphtheria. Without antitoxin serum, they will perish - and the closest supply is 650 miles away! The only way to get the serum to Nome is by sled, but can the dogs deliver it in time? Heading bravely into a brutal blizzard, Balto leads the race for life."

Purchased a used copy from the library sale shelf.

This book has earned its way into being called a classic of children's early readers.  Still in print after more than twenty years, it's a story that will never age.  Briefly telling the true story of a sled dog relay that travelled from Anchorage to Nome, Alaska to save the people of Nome from an outbreak of diphtheria in 1925.  The story plays on the emotions by focusing on a family with two sick children and then telling the story of Balto, the lead dog of the last team which made heroic strides through a blizzard to go further than any other team to make to Nome just in time to save lives.  An exciting story with cute illustrations of the dogs showing them with a slight puppy look that is sure to delight dog lovers and impress readers with the fact that this really happened.  I have an old original copy of the book which is labeled Step 2, however the book now is published as part of the Step 3 line. 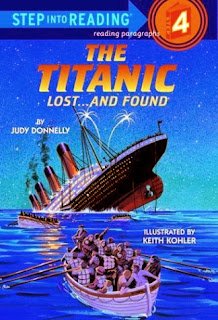 365. The Titanic: Lost ... And Found by Judy Donnelly. Illustrated by Keith Kohler.
Step Into Reading, Step 4

"Titanic. Just the name evokes tales of the doomed ship that have captivated people of all ages for more than 100 years.
Early readers will enjoy this exciting account of the world's most famous disaster-at-sea and the discovery of it's remains many years later.

Step 4 books are perfect for independent readers who are confident with simple sentences and are just starting to tackle paragraphs."

Another classic easy reader that has been in print for well over twenty years.  This book brings the story of the sinking of the Titanic to life for a first time introduction to the topic.  Quite a detailed look at the entire episode for an 'easy reader'.  The description of the sinking is well-described and manages to include all of the major events that lead to the sinking and the famous points of interest commonly known about that night.  The book goes on to talk about the rescue and the eventual safety laws and precautions put into place afterwards to ensure such a tragedy never happened again.  Then the book leaps forward to Robert Ballard's 1985 finding of the Titanic's resting place on the ocean floor.  Since the book was written only two years after the initial discovery this is where the story ends so none of the future exploration and findings had happened yet.  However, still one of the best books in this series that will remain a timeless classic. 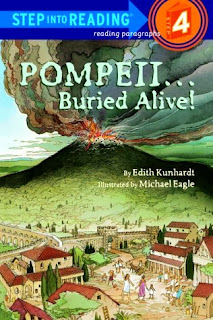 "Bursting with real-life drama, here's a moment-by-moment account--the only one for beginning readers--of the famous eruption of Mount Vesuvius."

The last "classic" I'm reviewing in this series, was written the same year as Titanic ... Lost and Found.  These easy readers often go out of print very quickly and it says much when one can keep in print for well over twenty years.  Pompeii tells the story of the fateful day that Mount Vesuvius erupted from the perspective of what it must have been like to have seen what was happening had you been there.  A detailed, gripping story that captures the imagination and could possibly send the reader into further exploration of the topic.  Even more intriguing is the jump ahead in time to when Pompeii has been buried and forgotten and Pliny's writings are being read then builders discover walls in the ground.  Eventually more of buried Pompeii is unearthed and a full-scale archaeological dig is underway.  The book explains this process until it reaches the historical, museum-like, tourist site, we have today.  The book ends warning that Vesuvius could erupt again at any time.  Due to the age of the book I checked the current information on this and found a very recent article, Sept. 2013, in which Japanese scientists presented to a volcano conference in Italy that Vesuvius "could erupt again at any time" and the Italian government must have a suitable disaster plan drawn up.  So the books information is still very current up to today.  The only problem I have with this easy reader is that the writing is not quite as good as the previous ones I've recommended as it does talk down to the reader in a way that could easily have been avoided.