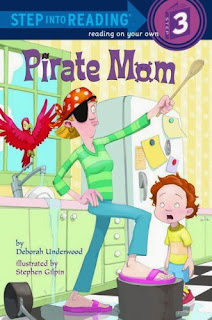 "Yo ho ho! Pete loves pirates, but his mom thinks they are rude and messy. Then Pete and his mom go to see the Amazing Marco, and Marco hypnotizes Pete’s mom into thinking she’s a pirate! Now Pete’s mom won’t behave. She chases the neighbors. She steals underwear off other people’s clotheslines. She’s even flying the Jolly Roger over the house. Pete has to find the Amazing Marco. He wants his real mom back!"

Purchased a used copy from a book sale.

Having never heard of author or illustrator I had no high expectations of this easy reader beginning chapter book.  I was therefore pleasantly surprised to find a fun, imaginative story with a message for both the child and the parent.  The art is also humorous and of the cartoon show quality.  When Pete wishes his mom would play pirates with him he gets way more than he expected after she is hypnotized into believing she is one.  Pete comes out realizing he'd better be careful what he wishes for and thankful for the mum he does have, not the one he wishes for.  Parents themselves can take note to remember that of course you must play with your children but remember to be their parent, not their friend.  If the messages don't hit you, it's still a funny story seeing mom getting into pirate escapades that she is going to have a lot of explaining to do for tomorrow! 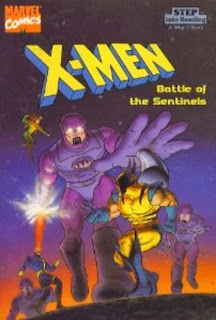 "The X-Men rescue the young mutant Jubilee from the Sentinels and offers her safe refuge at the X-Mansion in this exciting, moral-filled crime-fighter story."

Purchased a used copy at a thrift store.

This is an adaptation of an episode of the cartoon show and basically tells the story of how Jubilee came to Professor Xavier's.  It's pretty action-packed and uses every opportunity to name-drop every X-Men team member in existence, giving everybody at least one appearance.  So children needn't worry that their favourite won't show up.  A minor character does die in this book, though there is a slight allusion as to is-he-or-isn't-he, but if the reader is an X-Men fan or watcher of the cartoon show they will know he's not really dead and turns up in the next episode.  What can I say about the book.  It is what it is.
Labels: 1994 2006 easy readers humour superheroes