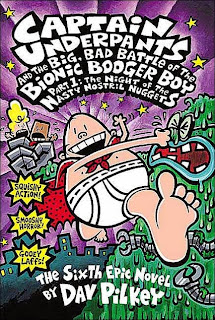 "George and Harold's latest prank has snotty school brainiac Melvin Sneedly seeing red, and he has a plan to get them back. But when Melvin tries to transform himself into a bionic-powered super boy, things go from bad to worse and the Bionic Booger Boy is born! Will Captain Underpants beat this blobby behemoth of blech, or is the entire world doomed to drown in disgusting nose dribble? "

I'll start off by saying this was my least favourite of all the Captain Underpants books so far.  I just didn't find it funny and actually felt sorry for the recurring character who goes a little crazy and turns into the bad guy in this episode.  I don't have much to say.  Kid's will probably go along for the ride easily enough.  What I did like was that Ms. Ribble did indeed keep her new personality as happened in the last book and that when reading these books in order we do find development, both in plot and characterization.  Happily, things turn out for our hapless villain but just as everything is all sorted out there is a big backfire and we are presented with a cliff-hanger ending that starts off the first two-parter in this series.  A good time for the author to introduce something new. 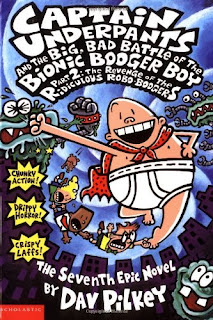 360. Captain Underpants and the Big Bad Battle of the Bionic Booger Boy Part 2: The Revenge of the Ridiculous Robo-Boogers by Dav Pilkey.

"Strangely enough Part Two picks up right where Part One left off. Coincidence? Don't think so, after all it is the second part of the cliffhanger and that's where they usually start up again. So the second part of our story begins with robo-boogers and ends with…Ha! We're not telling you that, no spoilers here…just know that this book is a monster-mashin', robo-wranglin', time-travelin', brain-switchin', nose-pickin' good time."

Continuing on from Part 1 this book brought the funny back for me.  All the usual devices, which were getting just a tad repetitive, are here but with a funny little spin on them.  There are several 'bad guys' this time around, though I'm still not crazy about the fellow student going maniacal but of course everything is sorted out in the end.  Pilkey reaches out to the adults, who by this time are being forced (heehee) to read these books aloud, with some sideways jokes that adults will get on another level.  I enjoyed "Commander Tomski"!  Good fun all around and Pilkey seems to have started a trend now as this book ends with the set up for the next book.  Not exactly a continuation like this two-parter, but we now know the doom the next book will begin with.  Get ready for Pterodactyls and Purple Potty People!
Labels: 2003 children early chapter books humour superheroes