354. The Maid's Version by Daniel Woodrell 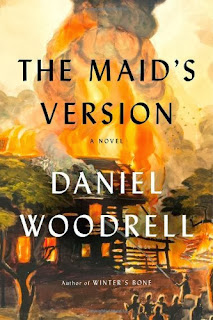 The Maid's Version by Daniel Woodrell

"Alma DeGeer Dunahew, the mother of three young boys, works as the maid for a prominent citizen and his family in West Table, Missouri. Her husband is mostly absent, and, in 1929, her scandalous, beloved younger sister is one of the 42 killed in an explosion at the local dance hall. Who is to blame? Mobsters from St. Louis? The embittered local gypsies? The preacher who railed against the loose morals of the waltzing couples? Or could it have been a colossal accident?

Alma thinks she knows the answer-and that its roots lie in a dangerous love affair. Her dogged pursuit of justice makes her an outcast and causes a long-standing rift with her own son. By telling her story to her grandson, she finally gains some solace-and peace for her sister. He is advised to "Tell it. Go on and tell it"-tell the story of his family's struggles, suspicions, secrets, and triumphs."

There is no sense in me being another reviewer to go on and on about how wonderful a writer Daniel Woodrell is; he just simply is; brilliant and unlike any other modern author.  This is a short book with a simple plot of an old lady retelling an horrific story from the past to her 12-year-old grandson one summer when he stays with her for the first time.  The main narrator is the grandson, grown up, but the book uses one of my favourite devices and that is to have a variety of narrators tell the story from their own point of view.   With the lyrical writing and the fine story this is a wonderful way to spend an afternoon.  We get a look inside the lives of ordinary people; the huge mountains made out of small dilemmas; the backstabbing, the affairs, the jealousy, the gossip, all the ugly things that run rampant in a very small community.  But it is rather ironic how the town's greatest disaster is a secret so simple no one can uncover it.  A good book, but honestly I must say I felt disappointed at the end.  I've read every novel of Woodrell's and this just isn't up to his finest work.  I love the multiple narrators but no one character stands out.  I usually fall in love with Woodrell's characters but there wasn't enough book here for the story.
Labels: 2013 crime historical fiction southern fiction