345. Original Unity of Man and Woman: Catechesis on the Book of Genesis by Pope John Paul II 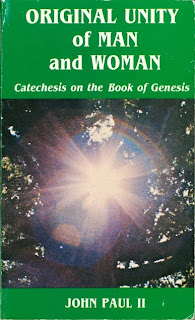 Original Unity of Man and Woman: Catechesis on the Book of Genesis by Pope John Paul II. Preface by Donald W. Wuerl
Rating: (5/5)
(US) - Out of Print
Original text available free at the Vatican (minus extensive footnotes added to book)


"This "Catechesis on the Book of Genesis" was presented by His Holiness in his weekly general audiences from September 5, 1979, to April2, 1980. Pope John Paul II explains that these reflections " sprang from the answer given by Jesus. to His questioners (Gospel of Matthew 19:3-9; and of Mark10:1-12), who had asked Him a question about marriage, its indissolubility and unity. The Master had urged them to consider carefully that which was 'from the beginning.'

"We, penetrating the simple content of this answer, are trying at the same time to shed light on the context of that 'beginning' to which Christ referred. The theology of the body has its roots in it. "Precisely for this reason, in the series of our meditations, we have tried to reproduce somehow the reality of the union, or rather of the communion of persons, lived 'from the beginning' by the man and the woman.''
A friend was clearing out some books and I received this as a result.
It's absolutely impossible to review a book like this.  Pope JPII was a brilliant man and this book is full of wisdom and enlightenment.  What follows is a brief description and how I felt reading the book.  This is a collection of the Pope's Wednesday general audiences from Sept. 5, 1979 to Apr. 2, 1980.  His theme of discussions are based on Jesus' response to the Pharisees in both Mark and Matthew when questioned about Moses' Law allowing divorce.  In Matthew he answers "Have you not read that he who created them from the beginning made them male and female..." and also "... your hardness of heart Moses allowed you to divorce your wives, but from the beginning it was not so...".  The Pope takes the phrase from these words, "in the beginning" and takes us back to the beginning to show us what Jesus meant by these words.  The whole book is an examination of mankind, humanness, male and female, marriage and our relationship to each other as God intended it "in the beginning".  The book concentrates on certain passages from Genesis 1-4, before the fall of man; that is before original sin.  This is the time of original innocence and what God's intentions for sinless man were.  The book covers such a small part of scripture and yet contains so much information it is impossible for me to do it justice here.
There are many absolutely "WOW" moments that just hit me on the head with the pure logic and common sense of God's creation of man (male and female).  A lot of time is spent on one concept which I found enlightening and that is the meaning of the creation of man and woman as separate sexes.  As always I find in my study of Scripture just how important it is to understand the meaning of the original Hebrew (OT) or Latin (NT) words before they were translated into English.  There are three words used in the Hebrew for man; first "man" itself which refers to mankind, humankind, human beings, it is a genderless word and, in English, was also understood to be so when used in a certain way (until feminism reared its ugly head).  In the OT this Hebrew word is not ever used again to refer to Adam once Eve is created.  Adam and Eve, themselves basically mean "man-male" and "man-female" and this is how Pope John Paul II refers to the genders throughout the book.  He then goes on to explain through this book why God created the two sexes, why they were created for each other, how they are meant to be together through marriage "as one flesh" so that they "are no longer two but one".  That the creation of the "man-female" was a gift that made the total of creation "good".  Looking at this relationship as God intended it "in the beginning", before the fall, as Jesus calls us to do in the NT is incredibly powerful, awesome and mind-blowing.  The book is not an easy read and when I was only half-way through, I knew this would be a re-read for me as I was being filled with such information that I wouldn't be able to fully intake it all in only one reading.
No mention is made in this book whatsoever of any circumstances of behaviour contrary to Natural Law, however, one cannot help but read this in the 21st century and boggle at how far from the "original unity" of the sexes this current (western) society has fallen.  The absolute beauty of the gift and man's objective to eventually reach agape love with his spouse is no longer understood or even remotely comprehended by modern society.
Labels: 1981 catholic christian non-fiction popes theology