344. The Blossoms Meet the Vulture Lady by Betsy Byars 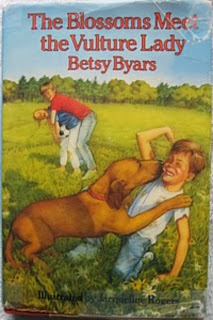 The Blossoms Meet the Vulture Lady by Betsy Byars. Illustrated by Jaqueline Rogers
The Blossom Family, 2

"Junior Blossom has set out to test his brand-new invention, a coyote trap. How on earth does he end up lost in a cave with Mad Mary, a.k.a. "the Vulture Lady," while his family attempts to find him in this suspenseful and sidesplitting Blossom Family sequel."

Received a used copy through Bookmooch.

Byars was one of my all-time favourite authors as a kid and I've continued to read her work ever since.  The Blossom series is one of my favourites.  Book 1 was absolutely hilarious and while this book has its funny moments it is more of a poignant story.  Jr. is up to his usual inventing and creating; this time building a coyote trap so he can win the capture reward money.  Only things don't go as planned and Jr. ends up capturing two pitiful creatures, but no coyote.  Jr. meets Mary Cantrell, better known as the Vulture Lady, and even better know in town as Mad Mary, a possible witch.  At first terrified of her, he soon befriends her and finds she is a gentle soul.  The books main theme is friendship, blooming and growing it, this involves Ralphie and Maggie as well, and poor Vern who realizes he doesn't have any friends outside of the family.  It also deals in a subtle way with prejudice and judging people on the way they dress and behave without bothering to know anything about them as a person.  A good fun book and sequel to The Not-Just-Anybody Family.  Not as funny though and contains some childhood practices of the time that wouldn't be exactly advisable for 21st century kids to participate in because of the question of safety in today's world.  Though certainly a nostalgic look back at a more simpler, innocent way of life.  A great series!
Labels: 1986 MG realistic fiction