341. The Duel by Alexander Kuprin. 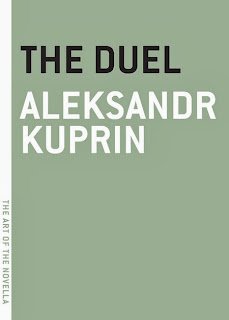 The Duel by Alexander Kuprin.  Translated by Josh Billings.

The Art of the Novella

"An absorbing saga about the brutalities of military life upon its own soldiers. Stranded at a distant outpost, young Romashov finds himself obliged to fight a duel—over something he realizes is meaningless. As the novel hurtles toward a startling conclusion, it reveals itself to be a luminous depiction of the end of an era."

Purchased from the publisher as part of their monthly novella book club.

This was a tough read for me, taking me several weeks to read as I would easily put it down and ended up making myself read something from it every day to complete it.  It's not that I didn't receive any enjoyment from the story but rather that I couldn't connect with it on any level.  For the most part it is the story of a young love-sick soldier in the Russian Tsarist Army.  He visits and pines for a married woman who strings him along and his overdramatic moonings and swoonings are so over the top my eyes hurt from rolling so much.  Secondary to this is the description of how tough, miserable and unfeeling life in the army was for both the soldiers and the officers, though mostly the soldiers at the hands of the officers.  Our main character is an officer and though he is careless and prideful he isn't mean and sees the cruelty that goes on often trying to stop verbal and physical assaults in an unobtrusive way.  The author really was in the army himself and we can see this as a reflection of what it may have actually been like to be in the Tsar's Army, and while it was terrible indeed it didn't strike me as any different than stories of other late 19th century army life.  I enjoyed the army story much, much more than the "love" story.  The ending though I found quite chilling in realizing that this was a book written in the year of the first Russian Revolution.  One character suddenly starts waxing eloquently for several pages on how a glorious change is about to come and like a madman he describes what to him is a Utopia.  To me, it was very chilling indeed, frighteningly so, as he describes how men will become "individualistic", "gods unto themselves", living in peace and me knowing in hindsight the utter slaughter and unequalled killings of their own people Communism brought to Russia.  This "speech" totally turned my stomach but from an historical perspective is certainly an eye-opener!
Labels: 1905 classic communism novella romance Russuan Lit war