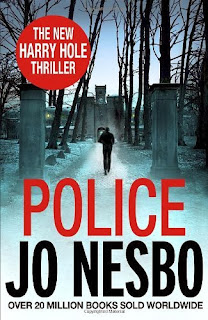 Several police officers are found murdered at the scene of an old and unsolved murder case that they were involved in investigating. The killings are extremely brutal and bestial. The police have no leads. What's more, they're missing their best investigator. A severely wounded man in a coma is kept alive at a hospital in Oslo. The room is guarded by the police and the identity of the patient is kept secret."

Wow. Wow. Wow.  After Phantom, which left everybody wondering if it was the end of the Harry Hole series, I just didn't think Nesbo could ever outdo himself.  But, my God, he has indeed done just that.  What an absolutely thrilling, horrific serial killer story that both grips the reader with the actual case and progresses the stories of the running characters in this series, especially the troubled Harry Hole.  I do admit I found the start a bit slow, I wondered when we were going to find out where Harry was after we'd left him so suddenly in the last book and it took a while for him to appear. But my impatience was quenched with his arrival and I was floored with the places Nesbo went with the regular characters in this book.  The killer in this book is after the police themselves and gets himself dubbed "The Police Killer".  One of the more gruesome killers in my recent serial killer book reading.  The ending is very good, Nesbo leaves us with a scenario that the series will be continuing with a setup that will be a bit different than the past, a bit of a new direction, but also that though the case has been solved in this book, there are also some loose ends and the next book may perhaps begin with a shocking tragedy (or not). We'll have to see.  Some very fine Nesbo plotting, characterization and just good ol' story telling here!
Labels: 2013 mystery Scandi-crime thriller