315. Captain Underpants and the Wrath of the Wicked Wedgie Woman by Dav Pilkey 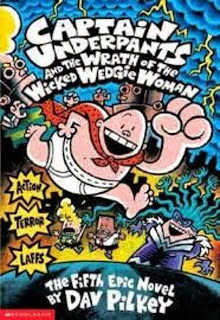 "Watch out, world — it's wedgie power with a vengeance when Captain Underpants faces the wickedest, wildest villain yet!

George Beard and Harold Hutchins don't get straight A's, aren't sports stars, and can barely walk down the hallway without getting into trouble. But they have one thing that most folks at their school don't have: Imagination. And that drives their mean homeroom teacher, Ms. Ribble, crazy!

This time, George and Harold have imagined up a comic book where Ms. Ribble turns into an evil, bionic-powered, wedgie-giving wacko. And now she's mad enough to flunk them out of fourth grade. Will Ms. Ribble's revenge ruin our heroes' hopes? This looks like another job for Captain Underpants!"

Another fun story of adventure for Harold, George and Captain Underpants.  This time things stay closer to home and the kids accidentally turn Ms. Ribble into the Wicked Wedgie Woman.  Great story with lots of laughs, references to past books reminding us of Captain Underpants past exploits.  Underpants also learns of his background story and a hidden talent he didn't know he had.  What was surprising about this book is that Pilkey manages to bring character development to the table and these unassuming books hold a lot more than we think they do.  Ms. Ribble is about to retire, her nastiness is examined, she and Mr. Krupp almost get married.  But as Wedgie Woman, Ribble is even worse than she was as her own self.  When George and Harold finally get Ms. Ribble back to herself again, they make a minor personality change and the book ends with an entirely new character for Ms. Ribble.  Will she stay this way?  Will the boys finally have a friend inside the school?  I'm actually quite interested to see what happens in the next book.
Labels: 2001 children humour superheroes