309. The Cross and the Switchblade by David Wilkerson with John & Elizabeth Sherrill 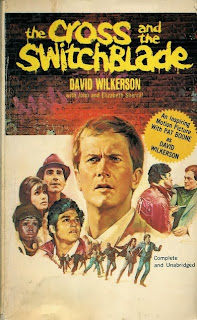 "A young preacher from the Pennsylvania hills comes to New York City and influences troubled teenagers with his inspirational message."

This is the inspiring autobiographical story of an evangelical minister's crusade to open a home for street, gang and drug involved teenagers of the late fifties and early sixties.  His ministry succeeded and became Teen Challenge which still exists today.  Wilkerson's story is touching and interesting especially from an historical view as to how these societal problems were first dealt with during this time period.  The language is dated with the overuse of the words "dope" and "addict"  also "Negro", the n-word and women's place in society but of course this all reflects the time period.  I also found Wilkerson's ability to pray to God at a moment's notice and receive immediate answers, within minutes, often in a room full of people to be quite, shall we say, over enthusiastic.  However, upon looking the man up, he also claimed later in life to have received prophetic visions ... so who am I to judge.  But I really did find laughable one chapter near the end where he spends the entire time explaining to a Jesuit priest what the Holy Spirit is.  I'm Catholic, and know the Jesuits have had their naysayers in recent decades, but really!  How anyone cannot know how important the Holy Spirit is to the Catholic faith, Confirmation anyone?, especially a priest is beyond ridiculous.  While I did not agree with much of the theology in the book, I appreciated the heart felt spirit and love of Christ behind it and did very much enjoy hearing the success story of the organization and many youths who have been helped because of the unending commitment of the author.  Interestingly my used copy contains a small slip of paper with a note hoping the recipient "enjoyed the Outreach Team that most recently visited your Church".  Signed "The Teen Challenge Farm" which my research shows would have been located in London, Ontario. Also, as a side note, Wilkerson only died a couple of years ago tragically, in a car accident, at the age of 80.