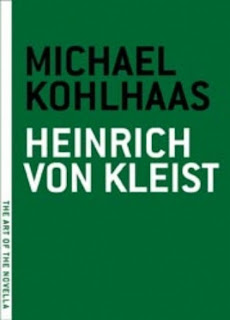 Michael Kohlhaas by Heinrich Von Kleist. Translated by Martin Greenberg
The Art of the Novella

"Based on historical events, this thrilling saga of violence and retribution bridges the gap between Medieval and modern literature, and speaks so profoundly to the contemporary spirit that it has been the basis of numerous plays, movies, and novels.

It has become, in fact, a classic tale: that of the honorable man forced to take the law into his own hands. In this incendiary prototype, a minor tax dispute intensifies explosively, until the eponymous hero finds the forces of an entire kingdom, and even the great Martin Luther, gathered against him. But soon even Luther comes to echo the growing army of peasants asking, “Isn’t Kohlhaas right?”

Widely acknowledged as one of the masterworks of German literature, Michael Kohlaas is also one of the most stirring tales ever written of the quest for justice."


Purchased a new copy as part of the publisher's Art of the Novella bookclub.

It is beyond me to discuss this title.  I had a hard time reading it from the get go.  I googled the book quite frequently to get the gist of it and it seems, I think, we are supposed to sympathise with Kohlhaas.  I thought he was a selfish, pig-headed, violent idiot and thought he should have just taken his horses back and got on with his life instead of causing such pain and anguish in the name of so-called "justice".  I call it revenge.  I really tried to force myself to finish, perhaps becoming enlightened eventually, but at the 60% mark just had to put it aside as not for me.  I can't complain though, out of the 14 books I've read for this club so far this is the first that I have DNF'd and the really the first that I didn't even enjoy at least to 3 stars.
Labels: 1810 classics DNF novella