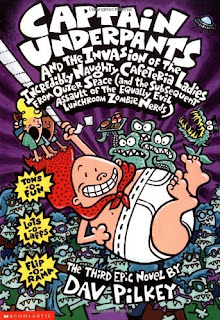 283. Captain Underpants & the Invasion of the Incredibly Naughty Cafeteria Ladies From Outer Space (and the Subsequent Assault of the Equally Evil Lunchroom Zombie Nerds) by Dav Pilkey.
Captain Underpants, #3

"An alien spaceship has conveniently landed on the roof of Jerome Horwitz Elementary School. At the same time, George and Harold pulled off the prank of their careers by tricking the cafeteria ladies into flooding the school with slimy lime-green foam.

Fed up, the cafeteria ladies quit, leaving room for three massive, tentacled space aliens in disguise to assume their positions and slowly change all the children into evil lunchroom zombie nerds. Only the amazing Captain Underpants can save the day now. But even he may have met his match when he encounters a giant man-eating dandelion of doom!"

My son was gifted a copy for Christmas several years ago.

Book Three continues on with the irreverent but highly amusing tales of the silly and troublesome George and Harold and their creation, Captain Underpants.  This outing brings us aliens from outer space who plan to take over the world, the lunch ladies finally have their fill of George and Harold, and milkshakes that turn the whole school population into zombies.  But most exciting of all, book three tells us how Captain Underpants gets his superpowers.  Finally, he has more to fight evil with than just wedgie power.  A load of fun, didn't quite make me laugh out loud but had me giggling. 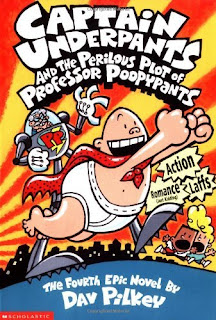 "Professor Pippy P. Poopypants may well be the greatest scientific genius the world has ever known. Unfortunately, he has such a silly name that nobody takes him seriously! He's been laughed out of every university in the world.

In fact, the only place that'll hire him is Jerome Horwitz Elementary School. Professor Poopypants is certain that schoolchildren would never laugh at his name. "Kids are so accepting and loving," he assures himself. And it's really important that NOBODY laughs at his name, or makes a comic book about him, or makes jokes about him in anyway. Because if one more person does...Professor Pippy P. Poopypants might just fly into a frenzied rage and take over the planet with his brilliantly wild and evil inventions!"

My son was gifted a copy for Christmas a long time ago.

This is the last book in the series that we own but I'm going to finish off the rest with visits to the library as I'm finding them quite delightful.  This is the first appearance of this particular villain but I came across him in book 10, which was the first book in this series I ever read, and that was a sequel to book 9.  Sooo, we can see Professor Poopypants, at least as he's called in this book becomes a favourite Underpants' villain.  He's the kind of villain you love to hate though because at first he seemed a nice guy wanting to feed the world and eliminate it's garbage problem both at the same time with his new inventions.  However his unfortunate name makes him a laughing stock whom no-one will take seriously and this warps the professor's mind beyond repair and he decides to take over the world instead.  This is another hilarious adventure with George, Harold and Captain Underpants.  The craziest part that kids will have fun with is a chart that Poopypants uses to enforce upon everyone a new silly name.  Closing my review now with my own new silly name!  signing out: ... Zippy Banananose.
Labels: 1999 2000 children humour superheroes