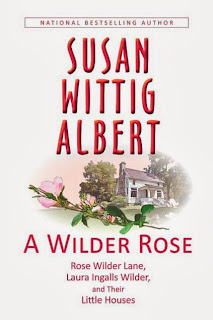 "In 1928, Rose Wilder Lane—world traveler, journalist, much-published magazine writer—returned from an Albanian sojourn to her parents’ Ozark farm. Almanzo Wilder was 71, Laura 61, and Rose felt obligated to stay and help. To make life easier, she built them a new home, while she and Helen Boylston transformed the farmhouse into a rural writing retreat and filled it with visiting New Yorkers. Rose sold magazine stories to pay the bills for both households, and despite the subterranean tension between mother and daughter, life seemed good.

Then came the Crash. Rose’s money vanished, the magazine market dried up, and the Depression darkened the nation. That’s when Laura wrote her autobiography, “Pioneer Girl,” the story of growing up in the Big Woods of Wisconsin, on the Kansas prairie, and by the shores of Silver Lake. The rest—the eight remarkable books that followed—is literary history.

But it isn’t the history we thought we knew. For the surprising truth is that Laura’s stories were publishable only with Rose’s expert rewriting. Based on Rose’s unpublished diaries and Laura’s letters, A Wilder Rose tells the true story of the decade-long, intensive, and often troubled collaboration that produced the Little House books—the collaboration that Rose and Laura deliberately hid from their agent, editors, reviewers, and readers.

Why did the two women conceal their writing partnership? What made them commit what amounts to one of the longest-running deceptions in American literature? And what happened in those years to change Rose from a left-leaning liberal to a passionate Libertarian?

In this impeccably researched novel and with a deep insight into the book-writing business gained from her own experience as an author and coauthor, Susan Wittig Albert follows the clues that take us straight to the heart of this fascinating literary mystery."

Received a review copy from the author (and an ecopy through Netgalley!).

I've always loved the Little House books and reading about Laura: I also loved the TV Show and am interested in anything to do with the topic really.  I've not ever read anything by Rose, at least credited to her, though, but have to say when I first started hearing the rumours and then the truth of the extent she was involved in the "Little House" authorship I was not shocked or even surprised.  With Rose and Laura's background, it just makes so much sense that things unfolded the way they did.  Ms Albert has offered here what is commonly referred to in children's publishing as the "historical biography".  This is not a children's book, though the author has decided to use the same fictional device to tell the true story of how the Little House books were written.  The book is more about Rose, almost a biography of her life, than it is of Laura; only her later life is covered except where topics from the books are discussed.  I found the book extremely entertaining and a good read, though not a page-turner.  I did find that when I put it down it was easy to leave it and pick it up a few days later and simply continue from where I left off.  While the book was entirely readable, there were a few slow parts, the inside story of publishing can only reach a certain level of excitement :-) but when the book was concentrating on Rose's life or the relationship between mother and daughter I found it fascinating.  Photographs certainly would have been a much welcome addition, but I can also understand that they would have blurred the lines between this being accepted a fiction as opposed to non-fiction, or fictional history.
Labels: 2013 biography books about books historical fiction