285. Fox On Stage by James Marshall 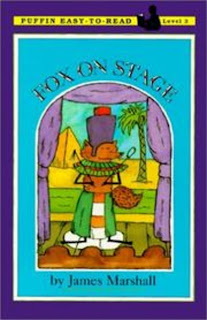 Fox On Stage by James Marshall.

"Another title about Fox and the gang getting up to mischief. This time Fox is putting on a scary play called "The Mummy's Toe" and all his friends have a role - with Fox as the hero."

Purchased a secondhand copy from a thrift store.

James Marshall is a favourite illustrator who has written many, many children's picture and easy-to-read books.  This is a fun easy-reader for the beginning reader divided into three separate short stories.  Each features Fox as the main character and while the stories are not related they do carry a theme of the performing arts.  "Fox on Film" has fox using his video recorder to make movies; "Flying Fox" has Fox watching and participating in a magic show and finally "Fox on Stage" has Fox and friends preparing, and putting on a play for the neighbourhood.