281. The Duel by Heinrich Von Kleist 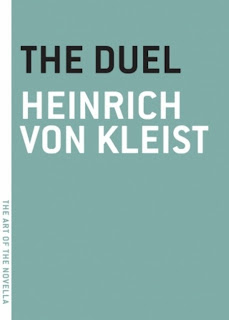 The Duel by Heinrich Von Kleist.  Translated by Annie Janusch.
The Art of the Novella

"One of the few novellas written by the master German playwright, The Duel was considered by Thomas Mann and others to be one of the great works of German literature. The story of a virtuous woman slandered by a nobleman, it is a precise study of a subject that fascinated von Kleist: That people are sometimes seemingly punished for their very innocence."

Purchased and received as part of the publisher's novella book club.

After my disastrous attempt to read this month's other selection Michael Kohlhaas by Von Kleist, it should be unnecessary to say I came upon this one with trepidation.  But I said to myself, at least it is very short so I will finish this one whether I like it or not.  So, what a pleasant surprise to find myself fairly flying through the story in just one reading.  Right from the first page my experience was different as this was easy to read, the story was entertaining and while wildly over dramatic it also had an understandable plot.  All things I could not find in MK.  The publisher's summary on the inside flap is incorrect and I see that the online summary has been changed to just one sentence which virtually summarizes the simple plot.  "The story of a virtuous woman slandered by a nobleman."  Things turn out to be much more than they seem though and through convoluted and last second revelations the truth comes out in the end.  The story is readable, I have no complaints.  I can only wonder though at the author's misconceptions of God, punishment and innocence (from both this story and Michael Kohlhaas); had he never contemplated God's gift of free will?
Labels: 1810 classic novella short stories