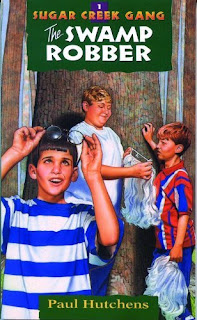 "The Sugar Creek Gang discovers a "disguise" hidden in a old tree. Does it belong to the bank robber hiding in the swamp? A mysterious map hidden near the tree proves to be even more exciting than the disguise. Before the adventure ends, the gang encounters the robber, helps Bill Collins welcome a new baby sister, and saves the victim of a black widow spider bite. Join the gang as they learn the lesson of "sowing and reaping"."

Purchased a secondhand copy at a book sale.

This is a Christian fiction adventure series aimed at boys, which has never been out of print since its first publication in the 1940s.  The edition I read is the 1997 "revised edition", the one still in print today, which has made the text more relatable to contemporary readers.  I don't have both editions side by side to compare but this 90's edition has no references to outdated technology or speech.  It still evokes an aura of taking place in the past, during a time when boys were given knives and guns and when they spent their time doing chores and playing outdoors at such things as the swimming hole and fishing.  The book does not feel outdated at all but reads as a story of a boyhood from the "olden days".  The writing is first-rate quality and I knew I was in for a treat of a read by the end of the first chapter.  If I had to compare it with anything it would be the "Great Brain" series.  Full of excitement and adventure, a well-written, page-turning story.  The book is unabashedly written both as evangelical Christian fiction and for boys.  Non-Christians and those looking for girl-inclusive books will not enjoy the emphasis.  The main character, Bill Collins, is the narrator and is seven years old at the time of the events, however we know it is his older self who is telling us this story.  Bill talks openly as a Christian, not preaching at all, but as if this is a natural part of his daily speech, simply who he is.  He also talks to boys about what it is like to be a boy, relating to them and imparting good values in the way friends would try to help each other do the right thing.  However, the boys do get up to all kinds of mischief and have a rollicking adventure in this book which involves a mysterious disguise, a bank robber and a man who has been dead for ten years.  I thoroughly enjoyed all five members of the Gang, found the plot to be realistic, and will be adding this series to my reading rotation as I can find the books.
Labels: 1940 1997 christian MG mystery