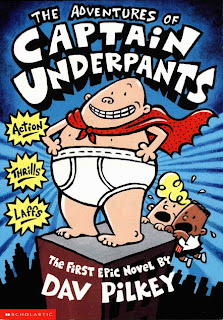 "George and Harold's principal, mean old Mr. Krupp, doesn't like the pair's pranks or their comic books. And he's cooked up a plan to catch George and Harold and stop their shenanigans — once and for all! Here's the story of what happened when that plan back-fired, and Captain Underpants leaped off the page to save the day!"

My son received this as a Christmas gift some years ago.

I had only read one Captain Underpants book so far, and that was the latest one, #10.  No need to add yet another review to the hundreds out there of this first one, so just giving my brief observations as a newcomer. Starting back at the beginning with the first book is fun to see how George and Harold turned their nasty, mean principal into the fun-loving superhero.  This book has one flip-o-rama section and one comic book section, making the rest of the book illustrated text.  It actually had a lot more text than I had expected.  A fun story to start the series off with but not exactly hilarious.  I much preferred  book 10 than #1, good to see the series got better as it went along! 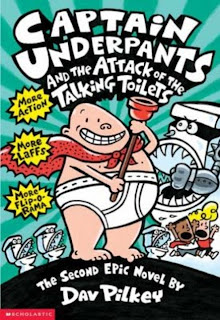 "After George and Harold tamper with their classmates' science projects, they create the most horrible, life-threatening monsters ever: the terrible Talking Toilets and their evil boss, the tyrannical Turbo Toilet 2000. Can anyone save the school from these crazed carnivorous commodes? Watch out, world — because big briefs are back!"

My son received this as a Christmas gift quite a while ago.

With the second book in the series, Pilkey picks up steam and presents a totally hilarious story.  Following the same formula as the first book, this one ups the fun factor with a couple of comic sections and two Flip-o-ramas.  Funnily enough toilet humour is limited to the presence of toilets and there were laugh out loud moments even for me!  Book one was just OK however with the second outing for Captain Underpants Pilkey doesn't hold back and we get to see that he's fully capable of: making kids laugh, with outrageous silliness and humour of a kind that kids and adults will get on different levels.  These books really helped my learning disabled reluctant reader become interested in reading and while not Newbery Medal material, this is what kids, and some adults, actually enjoy reading!  Fun!  I hope the next one continues on this level.
Labels: 1997 1999 children early chapter books humour superheroes