272. We'll Meet Again: Deathbed Visions - Who You Meet When You Die by Colm Keane 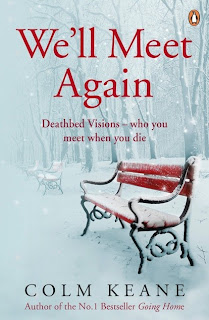 We'll Meet Again: Deathbed Visions - Who You Meet When You Die by Colm Keane

"We do not die alone. That is the remarkable conclusion of We'll Meet Again, an extraordinary new book examining deathbed visions that will resonate with readers who have been mesmerised by the experiences recounted in books like Proof of Heaven and Embraced by the Light.

Those who have accompanied the dying, and closely observed what they have said and done, give us a fascinating account of what happens as we die. Dead parents, children, brothers, sisters and close friends are among those who return to meet us. Sometimes we see beautiful landscapes. Less commonly, we see well-known religious figures. Colm Keane also examines the scientific response to the prevalence of these visions.

Colm himself sat by his teenage son's deathbed as he died, and experienced the extraordinary light and peace that came into the room after his son had passed. In We'll Meet Again he talks to others who have been in his shoes and the book features a riveting collection of 70 real-life stories."

Received a review copy from the publisher through Netgalley.

I have been reading a lot lately on the topic of near-death experiences and people who come back to tell what they experienced in Heaven.  When the publisher offered me an ecopy of this title (it is only available on ebook) to review I was intrigued as it visited that topic but branched out mainly onto deathbed visions and other experiences of the dying and also those of friends and relatives of those who had recently died. While the book did not state it had any Christian content I was hoping to find some by the nature of the topic and the fact that all subjects interviewed for this book were Irish.  While the author makes a point of noting that these experiences are found among all peoples, regardless or creed, sex, age, or heritage I was pleasantly surprised to find the majority of the accounts were given by Catholics, of varying degrees of practice.  Their religion was never mentioned but the accounts would mention going to Mass, saying the Rosary, praying to the saints, etc.  Also while not all accounts were given by Christians almost all of them were, if not Catholic, then another denomination, so I was pleased the book proved to be what I was hoping for.

Divided into sections on deathbed visions, near-death experiences and other visitations which don't fit the other two categories such as relatives being visited the moment a loved one dies across the country or on the other side of the world, the book contains a diverse selection of accounts yet they all have one thing in common, all the participants are Irish born.  Keane has written two previous books on the topic of deathbed visitations and he lets us know this book is the result of an accumulation of significant accounts which didn't fit into his other books, simply because he ran out of space or because they didn't fit the specific theme of those other two books.  As such, what we get here is account after account which starts off truly fascinating but by its nature starts to become monotonous as the same but different experiences are recounted over and over.  My favourite section was the one where my personal interests lie, the near-death experiences, but I did enjoy reading the whole book until at a point in each section, repetition bred a certain monotony.  I'd recommend reading in small doses to avoid this. The accounts are written in the words of the participant or the one recounting the event for another so one gets a certain feel for each individual case and I truly believed some while having doubts about others.  All the information that I've read on this topic, that there is an afterlife, a Heaven and that we will meet our loved ones again was confirmed by these accounts; there was no new information, merely a atmosphere that so many experiencing the same thing cannot be wrong.  I also enjoyed the last chapter in which Keane takes all the common scientific "explanations" for death and near death phenomena and scientifically (or by reason) refutes them.  A short and interesting read for those interested in the topic.