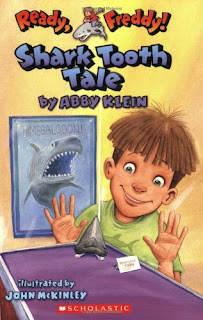 "Get to know Freddy Thresher, the first grade shark expert with an uncanny knack for mischief. Join Freddy in this adventure as he schemes and scrimps, trying to earn enough money to buy an awesome fossilized shark tooth. Packed with humor, illustrations, and even factual information about sharks."

Purchased a new copy at a Scholastic Book Fair some time ago.

I'd never even heard of this series for beginning chapterbook readers and was pleasantly surprised to find it an enjoyable read.  The story was fun with several events taking place for excitement.  I enjoyed that the whole family was part of the story including the parents. I only disliked the bickering with the older sister; it was a bit too mean for my tastes but otherwise the characters were well written if cliched: the bully, the snooty girl, etc.  Educational information was placed into the story in a natural way, in this case about the prehistoric shark, the Megalodon.  Freddy is in Grade 1 and the series will appeal to younger elementary while certainly being aimed at boys.  I was also surprised at the quality of the illustration.  McKinley has a flair and style that is a cut above the norm.  I loved his characters and they certainly enhanced the story.  I would want to try another before fully recommending the series but at book #9 it is probably representational of the others.  A fun story!
Labels: 2006 children early chapter books