231. Animals of the Bible by Isaac Asimov 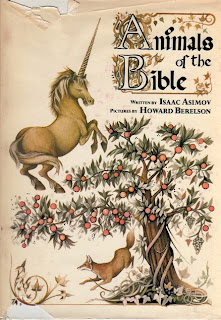 Animals of the Bible by Isaac Asimov. Pictures by Howard Berelson

I love Asimov as a science fiction writer and I've read a number of his non-fiction science books for children.  He is a great writer.  He is also known for being a great atheist and is well-known for some stinging remarks made about the Bible/believers and his atheistic quotes are favourites of his like-minded fellows.  So seeing that he wrote books about the Bible and Bible stories during the days he professed to being agnostic (admittedly feigned) is quite humorous and since I'd never actually come across one before I had to pick this up especially when I saw the gorgeous illustrations.  Each page is devoted to one animal and has a paragraph of information, obviously the hippopotamous' is longer than the aurochs'.  Berelson has used sepia tones and a medieval style to present slightly fantasized though realistic versions of the animals in his illustrations.  This is a beautiful book to look at.  Asimov's introduction is a combination of telling us how important the bible is while stating that it is all legends.  Knowing his true beliefs he has actually written quite a friendly intro. about the Bible and the plants and animals mentioned.  He hopes this book "will make the Bible mean just a little more to you."  This is actually funny because 4 years later in 1982 he is quoted as saying in the secular humanist magazine, Free Inquiry, " I don't have the evidence to prove that God doesn't exist, but I so strongly suspect he doesn't that I don't want to waste my time."  Did he waste his time writing his bible story books for kids?  Probably not, he got paid.  Anyway, Asimov is a storyteller and has a nice narrative voice when writing non-fiction which is imperative when writing such for children.  Thus, while each page only contains a snippet of text, it is engaging as well as interesting.  Best feature is the compilation of Biblical beasts and the contemporary medieval-style illustrations.  The book is a looker!