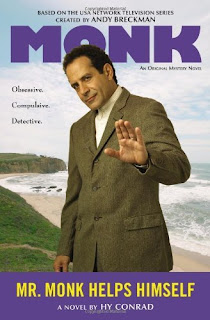 Mr. Monk Helps Himself by Hy Conrad
The Monk Mysteries, #16

"Now that Monk and Natalie are both in San Francisco again, life is almost back to normal for the duo, with one exception: Natalie is studying for her PI license, the last step to becoming Monk’s full partner.

Before taking the plunge, Natalie sneaks off to Half Moon Bay for a retreat run by Miranda Bigley, charismatic leader of the Best Possible Me self-help program, whose philosophy has helped Natalie deal with her recent life changes. But her plans for a relaxing weekend away are disrupted when Monk tracks her down, determined to rescue her from the “cult.” Their argument is cut short when Miranda, in full view of everyone, calmly walks to the edge of a cliff and jumps off.

Even though Miranda’s death looks like suicide—especially when it’s discovered that she was on the brink of financial disaster—Natalie is sure it is murder. But Monk brushes her off to help the SFPD solve the murder of a clown, despite his coulrophobia, or fear of clowns—number ninety-nine on his list of one hundred phobias.

As Natalie and Monk begin their separate investigations, they are quickly caught up in many precarious situations, but if they want to figure out whodunit, they will have to find a way to become true partners…"

Received a review copy from the author via Virtual Authors Book Tours.

This is the first Monk book I've read and I had a ball reading it!  I am a huge fan of the show and must admit that part of that is because I see parts of myself in Monk.  I'm OCD and have my own phobias, however Monk is at such an extreme I can laugh at myself through him.  I'll never forget an episode where he tries to walk up a ladder, well, I'm afraid of ladders, too.  I was on the floor in hysterics, even though I felt nervous for him at the same time! Of course, we are also both brilliant.  LOL.  In true Monk style, I was floored when Sharona left the show and didn't watch the next two seasons because of the change but gradually got back into watching reruns and got used to Natalie, though I'd frequently lament the loss of Sharona when Natalie bugged me. LOL  Anyway, onto the book!

Having never read a Monk book but having read, and loved a previous Hy Conrad book, the author switch with this book was a non-issue for me.  I was just thrilled to find one of my favourite characters paired with a new-found favourite author!  The mystery is a fun one, with a self-help guru committing suicide.  The irony is not overlooked and when Monk hears Natalie was at a retreat that weekend he goes off the deep-end calling it a cult, constantly.  The humour and jokes are hilarious and witty.  Two cases are worked on during the course of the book, the other involving one of Monk's top 100 phobias, the dreaded clown!  The thing I like best about the book though is that Conrad knows the characters so well (he was a writer for the show's entire 8 seasons) that you can hear their TV voices inside your head as you read, which is absolutely wonderful and nostalgic.  In reality, this is one of the reasons we read these TV tie-in books in the first place; because we don't want to let go of the characters we've fallen in love with.

Two things this book has made me want to do.  Go back and read the other Monk books as there has been story development since the show ending; the characters are not static; they've moved on and I'd love to get back into this world.  I'd also like to go back and watch the TV series again and watch it straight through, as obviously with my hit and miss watching of the later seasons I've not seen every single episode.  I look forward to Conrad's next installment in this series and, while I can't speak for long time fans of this book series, I don't see why they won't be pleased with Conrad's taking over the reigns.
Labels: 2013 mystery television