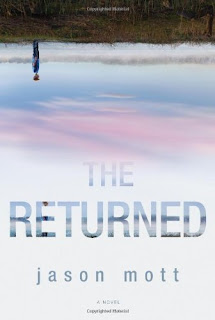 "Harold and Lucille Hargrave's lives have been both joyful and sorrowful in the decades since their only son, Jacob, died tragically at his eighth birthday party in 1966. In their old age they've settled comfortably into life without him, their wounds tempered through the grace of time…. Until one day Jacob mysteriously appears on their doorstep—flesh and blood, their sweet, precocious child, still eight years old.

All over the world, people's loved ones are returning from beyond. No one knows how or why, whether it's a miracle or a sign of the end. Not even Harold and Lucille can agree on whether the boy is real or a wondrous imitation, but one thing they know for sure: he's their son. As chaos erupts around the globe, the newly reunited Hargrave family finds itself at the center of a community on the brink of collapse, forced to navigate a mysterious new reality and a conflict that threatens to unravel the very meaning of what it is to be human."

Received a review copy from Harlequin Canada (also an egalley through Netgalley!).

Utterly amazing!  It is hard to believe this is the author's first novel!  A book that picks you up from the first pages and carries you along for an incredible emotional ride until its final page.  I am especially attracted to books that deal with death and the everlasting life and when I heard about this book I was intrigued to say the least.  A very unique concept that I haven't come across before which made me think of a reverse sort of "Rapture" that was all the fad some years ago.  Instead of people disappearing ... what if the dead returned? Brilliant idea and carried off so well.  Written in a third person narrative with alternating chapters from the point of view of a "Returned" person.  Some of the Returned appear once while others tell their story over several of these chapters.  As a Christian I'm always leery going into a mainstream book like this on how the author will deal with the issue of religion and I was pleasantly surprised to find two of the major characters were Christian, the 8yo's mother and the small town's preacher.  These characters were both strong in their faith and endured crises of doubt.  Other characters were strongly atheist and altogether the author handled this aspect extremely realistically and wrote his characters beautifully.  His expert use of language makes it no surprise when one reads his short bio. to find out that Mott is a previously published poet.  I am thoroughly head over heels in love with this story and found the ending to be pure poetry itself.  After reading the novel I found out about the trilogy of prequels and read them as well.  They can be read either first, as published, or after as I did, for a return to this amazingly unique world..
Labels: 2013 death romance science fiction