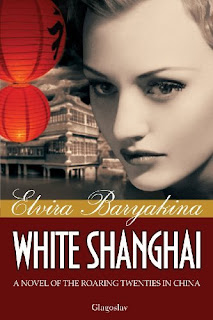 White Shanghai: A Novel of the Roaring Twenties in China by Elvira Baryakina. Translated by Anna Muzychka & Benjamin Kuttner

"Some called the place the ‘Splendour of the East’; others the ‘Whore of Asia’. A melting pot of different nations, fused by war and commerce, this was the Shanghai of the 1920s.

The Great Powers are greedily exploiting China for its cheap labour and reaping the cruel rewards of the opium trade. However, as a flotilla of ships carrying the remnants of the defeated White Army enters Shanghai, the uneasy balance of this frenetic international marketplace comes under threat.

Among the refugees is Klim Rogov, a journalist whose life and marriage have been destroyed by the Russian Revolution – all he has left are his quick wits and a keen worldliness that will serve him well in navigating the lawless jungle of Shanghai. He finds work as a reporter at a British-run newspaper, rubbing shoulders with international gangsters while defying the intrigues of sinister communist agents, clinging all the time to the hope that someday he'll be reunited with his beloved wife, Nina."

A sweeping, epic historical drama focusing on a family and those they interact with.  This book appealed to me because of my literary interest in the Russian Revolution and in Communist China.  I found this book an eye-opener as I was relatively unaware of the situation going on in Shanghai involving the Russian refugees escaping the socialist take over of their own country at a time when China itself was very unstable politically as its various factions tried to gain ground and take their country into one run by a government.  Communism hadn't won at this time but other forces gained very little ground and much defeat.  Shanghai became a place where the international communities needed to protect themselves, spies and double agents roamed the streets and decapitated heads flew, then adorned poles.

Like any good piece of Russian Literature this book is populated with a huge cast.  The story moves back and forth from concentrating on certain persons/people at a time but eventually they all intersect and become a part of one another lives.  I thrive on this type of storytelling; I find there it refreshing to receive different perspectives of the same story.  The first couple of chapters were slow but after that I was hooked quite profoundly and found myself sitting down and reading huge blocks of this chunkster at a time.  Many people from this story start out naive enough, wanting what is best for them/for others, but as they live the hardscrabble life and hearts are broken more than once they become hardened and I found everyone ended up making choices to survive that were contrary to their original nature.  Therefore I found it difficult to actually like any of the characters as I disproved of them all for the most part.  And many of them end up paying for their sins.  Nina, I found to be a very interesting character; here is one who started off greedy wanting all she could get for herself and she remained true to this philosophy right to the end, but perhaps she's finally found how it is to truly love someone back even if it means they most forgo their freedom to have the love back.

The story itself is quite political and I'd recommend that readers have some knowledge of the beginning of communism in both Russia and China.  The book is full of historical information, but not much in the way of letting you in on all the whys and wherefores .  It does assume you know what is meant.  The book is after all originally written and printed in Russian for an intended Russian audience.  The only quibble I have is that the book did contain a certain amount of typos.  I didn't really notice any until about a third of the way through, at first they were sparse, then they became a bit more frequent, then they settled but never quite disappeared.  They are obvious enough to make mention, but mainly consist of spelling errors and transposed or missing words.  This didn't detract from my reading of the book but it would be greatly improved by an intense edit before any further printings.  I'd recommend to those who are interested in the early stages of both these countries as they entered Communism and those who enjoy an epic family drama., knowing that there are no happy endings for everybody, just a few.