201 . How the Two Ivans Quarrelled by Nikolai Gogol. 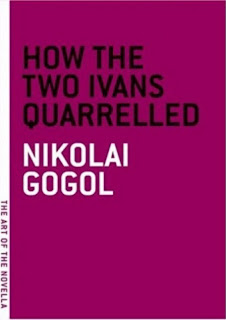 How the Two Ivans Quarrelled by Nikolai Gogol. Translated by John Cournos.
The Art of the Novella

"This lesser-known work is perhaps the perfect distillation of Nikolai Gogol’s genius: a tale simultaneously animated by a joyful, nearly slapstick sense of humor alongside a resigned cynicism about the human condition.

In a sharp-edged translation from John Cournos, an under-appreciated early translator of Russian literature into English, How The Two Ivans Quarrelled is the story of two long-time friends who have a falling out when one of them calls the other a “goose.” From there, the argument intensifies and the escalation becomes more and more ludicrous. Never losing its generous antic spirit, the story nonetheless transitions from whither a friendship, to whither humanity, as it progresses relentlessly to its moving conclusion."

Purchased a copy as part of the publisher's monthly book club.

I was first introduced to Gogol in an unusual way, by my grade 10 French teacher of all people.  M. Berard told us his love for this Russian author of short stories and spent some time reading aloud to the class "The Nose" from a French translation, of course taking time out to make sure we were getting it.  It's something I'll always remember.  Flash back to now and when I received this book, I thought Gogol?  Gogol? isn't that the  "Nose" guy so I looked him up and indeed it is the same author.  So it was with some glee I went into reading this story and finding out what my old French teacher found so delightful about him.  I thoroughly enjoyed the story but it was not what I expected.  Oh it was funny,  hilariously so at times, and I found myself chuckling at the satirical characterizations of the two Ivans and their quips to each other.  By the way there is also a third Ivan, who we must never confuse with the second Ivan!  But this isn't just a farce; it starts off funny and always has a tongue firmly planted in cheek but as the story progresses a gloom descends upon it and comedy turns to tragedy or perhaps travesty, depending on your point of view.  We start with a smile on our face and end, as the author intends, feeling "gloomy".  Now, I'm one of those people who love a depressing little story but these two brought this upon themselves and their fate still made me finish the book with a hearty, "HA!"  I'm finding I have quite a taste for Russian Literature, new and old, as a future review will prove.
Labels: 1835 2007 classic humour novella Russuan Lit short stories tragedy