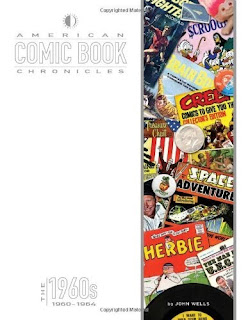 "The American Comic Book Chronicles is an ambitious new series of FULL-COLOR HARDCOVERS, where TwoMorrows' top authors document every decade of comic book history from the 1940s to today! John Wells leads off with the first of two volumes on the 1960s, covering all the pivotal moments and behind-the-scenes details of comics in the JFK and Beatles era! You'll get a year-by-year account of the most significant publications, notable creators, and impactful trends, including: DC Comics' rebirth of Green Lantern, Hawkman, and others, and the launch of Justice League of America and multiple earths! Stan Lee and Jack Kirby's transformation of superhero comics with the debut of Marvel' Fantastic Four, Spider-Man, Hulk, X-Men, Avengers, and other iconic characters! Plus Batman gets a "new look", the Blue Beetle is revamped at Charlton Comics, and Creepy #1 brings horror back to comic book form, just as Harvey's "kid" comics are booming! These are just a few of the events chronicled in this exhaustive, full-color hardcover. Taken together, the series forms a cohesive, linear overview of the entire landscape of comics history, sure to be an invaluable resource for ANY comic book enthusiast!"

I am not actually finished this book yet but I've read more than half and have no intention of stopping; it's just that I am reading it slowly since it is so awesomely entertaining and figure I've read enough to review it.  If you have any certain love for the comics and their history, whether you be an old pro or a relative newbie, I can't see any comic fan not just adoring this book.  It takes a behind the scenes walk through the comic book history year by year, publisher by publisher.  Absolutely chock full of illustrations from adverts, mini page shots (readable), cover shots and full-page page reproductions,  Just looking at the pictures is a joy.  But the meat is in the extensive text.  Intended as a full series to cover the years 1940-1999 (I think); this set of years is perfect to start off with as it is these years all the oldies dropped out of circulation and during this time that "National Comics" became DC Comics and the new upstart Marvel Comics came onto the scene.  The book covers all the major publishing houses: Dell, Gold Key, Archie, Harvey, MAD, DC, Marvel, etc.

I'm a '70s girl myself and while these years cover before I was born, many of the titles were what I read during my childhood or collected through used sources.  It has brought back some great memories, introduced me to some new titles I'd like to read and given me an amazing insight into the behind the scenes and public history of comics.  These years are also crucial as it is the period when the industry finally increased the permanent price of .10cent comics to .12cents and even the wallet busting .15cents at Dell.  Imagine if comic books were still priced so kids could buy them with their allowance!  Absolutely fascinating reading and I plan on getting the rest of the series from this time period forward; I'm not much interested in the earlier years.