194 . Notes From a Coma by Mike McCormack 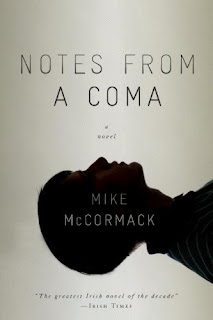 Notes From a Coma by Mike McCormack

"Rescued from the squalor of a Romanian orphanage, and adopted by the rural community of west Mayo, J. J. O'Malley should have grown up happy. The boy has no gift for it, though, and his new life has a brutal way of giving him plenty to be unhappy about. After a sudden tragedy, J. J. suffers a catastrophic mental breakdown. Unable to live with himself, he volunteers for an improbable government project which has been set up to explore the possibility of using deep coma as a future option within the EU penal system. When his coma goes online the nation turns to watch, and J. J. is quickly elevated to the status of cultural icon. Sex symbol, existential hero, T-shirt philosopher─his public profile now threatens to obscure the man himself behind a swirl of media profiles, online polls, and EEG tracings. Five narrators─his father, neighbour, teacher, public representative, and sweetheart─tell us the true story of his life and try to give some clue as to why he is the way he is now: floating in a maintained coma on a prison ship off the west coast of Ireland. Brilliantly imagined and artfully constructed─merging science fiction with an affectionate portrait of small town Ireland─Notes from a Coma is both the story of a man cursed with guilt and genius and a compassionate examination of how our identities are safeguarded and held in trust by those who love us."

Astounding!  Just loved it!  First off though it was not what I had originally thought it would be.  I was under the impression it was some sort of science fiction dystopia about prisoners being put into comas.  It's not.  The book takes place in a present day Ireland, if not exactly *the* present day Ireland;  the author takes liberties to make his reality work.  The writing is not linear and this will put some readers off but this format of telling a story from the points of view of a group of alternating narrators is one of my favourite devices and I was hooked by the second chapter.  On the surface we have typical Irish literature: the lives of a rural family, (while not dysfunctional) an unhappy family for the most part, especially JJ the main character.  JJ's life is told from his adoption up through his participation in this government trial coma program for prisoners.  JJ is a unique volunteer though and the book tells how that comes to be.  I loved JJ and his father; the other characters held no special charm for me but were very important in the telling.  What makes this book different, perhaps avant-garde, maybe pretentious, is the author has chosen to add footnotes which tell a separate story of the prison coma program called Somnos.  These footnotes continuously interrupt the flow the of the novel and can take up the bottom portion of several pages in a row causing you to hold your place as you read them.  It takes a bit to get used to them but honestly, after a while, I got the flow and while I at first thought it was indeed pretentious on the author's part to use this device instead of using separate chapters to tell this part of the story, I did become used to it and in the end can say I enjoyed it.  Not something I'd like to see become a norm but certainly a unique device by McCormack that turns out to succeed and I found the story to be a fantastic look into the psyche of a depressed man, while also enjoying the occasional thoughts of the Catholic characters whether they were practising or not.  Very much a literary novel but when all is said and done, a simple story and an easy read.  I may read another of the author's books if the summaries entice me as I appreciated his style and outlook.
Labels: 2005 2013 catholic coming of age mental illness speculative fiction