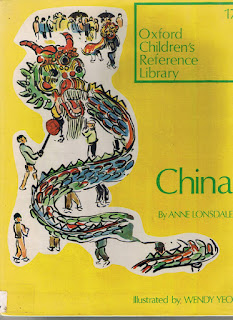 
Purchased a used ex-lib copy from a book sale.

This is an interesting book and especially interesting to read today from a sociological point of view because of the time period in which it was written.  A look at current China from the point of view of an early 1970s British author.  First of all the book is gorgeously illustrated in the Chinese ink water brush style by Wendy Yeo.  The pages alternate with a black/white illustration then a full colour illustration providing some beautiful art worthy of framing.  Secondly, the book is written in a wonderful storyteller narrative, occasionally breaking into telling myths and legends and turning history into a story; this makes the book entertaining as well as informative to read.  Why can't children's non-fiction still be written like this?  Each chapter is a two-page spread and contains a lot of information for such a presentation. The first 57 pages cover ancient history to the Communist October 1st.  That is 61% of the book.

Next is where the book becomes rather dated but is still quite useful and interesting as it looks at Communist China from within the context of its days under Mao from a British point of view.  Only three spreads are dedicated to "modern China", trying to be positive about the progress the government has made but emphasizing that people are still poor.  Next the book moves onto geographic regions and generally takes a historical approach again with topics such as the Yangtze, South China, etc. Then it moves onto agriculture such as tea, rice and bamboo again giving the history and describing the methods of farming which would have been current in 1971.  Then the heavily Chinese populated (or invaded) countries of Mongolia, Tibet, Singapore, Taiwan and Hong Kong are explored next, again this is a quick historical recap up to the 70s. Finally the book ends with generalities such as Chinese animals, art and writing.  So while this part of the book does contain outdated information it is still interesting to read as source material from the time period.  While the book wasn't originally written as a pure history book, taken today, it reads like one and I found it very interesting and well-written.  Again, I'll stress the art is wonderful and worthy of framing.
Labels: 1971 China history MG non-fiction