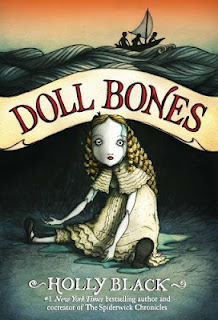 "Zach, Poppy, and Alice have been friends forever. And for almost as long, they’ve been playing one continuous, ever-changing game of pirates and thieves, mermaids and warriors. Ruling over all is the Great Queen, a bone-china doll cursing those who displease her.

But they are in middle school now. Zach’s father pushes him to give up make-believe, and Zach quits the game. Their friendship might be over, until Poppy declares she’s been having dreams about the Queen—and the ghost of a girl who will not rest until the bone-china doll is buried in her empty grave.

Zach and Alice and Poppy set off on one last adventure to lay the Queen’s ghost to rest. But nothing goes according to plan, and as their adventure turns into an epic journey, creepy things begin to happen. Is the doll just a doll or something more sinister? And if there really is a ghost, will it let them go now that it has them in its clutches?"

Loved it!  Holly Black brings another scary ghost story for the elementary age group with deliciously Gothic illustrations by Eliza Wheeler.  A very quick read for me, this story examines the relationship between three children who have grown up together, 2 girls and a boy, now having reached middle school age and the dynamics of their friendship are changing as adolescence, though unwanted, creeps upon them.  Childhood games have to end sometime and unfortunately for Zach his are ended abruptly by an unsympathetic father, slowly mounting puberty starts to hit the girls first and makes the group of three pull out the old saying "three's a crowd" as the girls' feelings for Zach change.  Throughout this personal turmoil they are forced to make drastic decision when the ghost of a murdered girl contacts them through an eerie old doll and will not let them rest until they have put her bone to rest.  A delightful story both on the interaction level between the characters and the Gothic, creepy ghost story plot.  A perfect read for middle school readers.
Labels: 2013 ghost story gothic MG paranormal