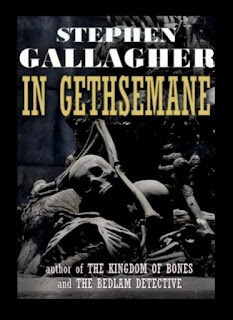 " In the years following the Great War, a skeptical conjuror and a spiritualist medium merge their interests to tour the regional lecture halls of the United Kingdom."


This short story now available as an e-read, was originally published in 1995 as part of an anthology.  I received a review copy from the publisher after enjoying The Bedlam Detective by the same author.  This Victorian period piece is a slowly mounting well-paced story of the Spiritualist movement and examines people's feelings about death vs the dead.  I really enjoyed the story and Gallagher has proven to be a writer I appreciate.  A fun look into this strange part of the Victorian era with a rather brooding ending.  The characters were well developed for a short story that was more about plot than character.  After the story are synopses of both "The Kingdom of Bones" and it's sequel "The Bedlam Detective".  Though this story takes place in the same time period it is not related to the two novels at all.