143. Rest in Pieces: The Curious Fates of Famous Corpses by Bess Lovejoy 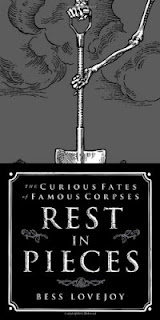 Rest in Pieces: The Curious Fates of Famous Corpses by Bess Lovejoy

But for some of the most influential figures in history, death marked the start of a new adventure.

The famous deceased have been stolen, burned, sold, pickled, frozen, stuffed, impersonated, and even filed away in a lawyer’s office. Their fingers, teeth, toes, arms, legs, skulls, hearts, lungs, and nether regions have embarked on voyages that crisscross the globe and stretch the imagination.

Counterfeiters tried to steal Lincoln’s corpse. Einstein’s brain went on a cross-country road trip. And after Lord Horatio Nelson perished at Trafalgar, his sailors submerged him in brandy—which they drank.

From Mozart to Hitler, Rest in Pieces connects the lives of the famous dead to the hilarious and horrifying adventures of their corpses, and traces the evolution of cultural attitudes toward death."

This book briefly, but on several occasions, insults Catholics & the Orthodox but I will address that at the end.  As I browsed though the table of contents I was quite surprised at how well read I've become on this rather macabre topic as I noticed expected names.  I then proceeded to look for some specific names to see if they were included and found everyone so I was quite pleased with the read ahead of me.  At first I was a little disappointed that the book was not written as a cohesive unit but rather simply as a collection of mini-biographies of what happened to famous corpses (or parts of) over the years though it is divided into common themed sections.  The stories are irreverent, with the author's voice thrown in for humour, but quite detailed and extremely interesting.  They are short and basic, however, so more details would be found in books dedicated to a singular person or a more academic volume such as Dickey's "Cranioklepty".  The book itself has a unique shape, not very wide like a paperback but tall.  It reminds me of one of those "Uncle John Bathroom Readers" in appearance and once you've read this book, it would make a great addition to your guest bathroom reading basket as it would be sure to bring some stimulating reading.  The only thing I took issue with in this book, and I'll try to keep it brief, is that I was offended by the author's treatment of Catholic personalities.  She goes on to say several times that Catholics "worship" Saints and relics; she also accuses the Orthodox of "worshipping" the remains of Saints.  This is not only untrue but offensive to two of the world's largest religions.  The first commandment states that Christians shall worship none other than God and to blatantly state they do otherwise is nothing short of ignorance.  I don't want to get on a soapbox about this but that the author, editor, publisher did not catch this in time is unforgivable.  Catholics\Orthodox venerate, honor, respect, hold in high reverence both the Saints and their relics but in no shape or form do they "worship" them.  This glaring untruth should be edited if the book is reprinted and fixed immediately in electronic versions, imho.
Labels: 2013 death forensics grave robbing history non-fiction