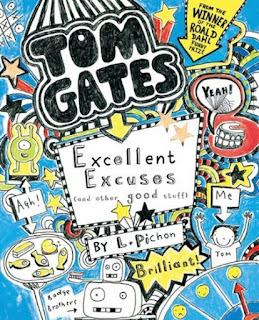 "Tom Gates, master of excuses, expert doodler and hilarious story writer is back:
Gold Star Award Chart!
Getting to the Top of Mr. Fullerman's AWARD chart is proving a bit Tricky! This is mostly because:
1. Marcus Meldrew is a sneaky so-and-so and up to NO good, if you ask me.
2. My tooth is aching SO much that I can't EVEN concentrate on drawing in class.
3. I keep getting sidetracked by interesting activities like SWIMMING, bug catching and, most importantly, spending quality time annoying my sister Delia."

Much like the "Wimpy Kid" books, this series is very similar except written at a bit of an easier level; it has much more drawing and graphically appealing that in some ways it could be called a graphic novel, though don't get me wrong it has no comic bubbles or panels and is a chapter book.  It is also decidedly British and hasn't been Americanized; in fact, at the end of the book "Tom" has created a visual and funny glossary which defines a lot of the British-isms for the reader.  I haven't read the first book and it didn't hamper my understanding of this one at all but I think I may have had an extra fondness for the characters if I had.  Extremely humorous in the British humour way but with no real plot, just the average (well, not-so-average) day-to-day doings of a middle school boy, his friend, annoying older sister and the class bully.  Fun read will appeal to reluctant readers and those who like to draw.