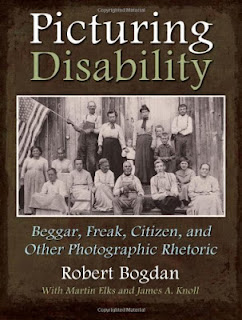 "Midget, feeble-minded, crippled, lame, and insane: these terms and the historical photographs that accompany them may seem shocking to present-day audiences. A young woman with no arms wears a sequined tutu and smiles for the camera as she smokes a cigarette with her toes; a man holds up two prosthetic legs while his own legs are bared to the knees to show his missing feet. The photos were used as promotional material for circus sideshows, charity drives, and art galleries. They were found on begging cards and in family albums. In Picturing Disability, Bogdan and his collaborators gather over 200 historical photographs showing how people with disabilities have been presented and exploring the contexts in which they were photographed.
Rather than focus on the subjects, Bogdan turns his gaze on the people behind the camera. He examines the historic and cultural environment of the photographs to decipher the relationship between the images and the perspectives of the picture makers. In analyzing the visual rhetoric of these photographs, Bogdan identifies the wide variety of genres, from sideshow souvenirs to clinical photographs. Ranging from the 1860s, when photographs first became readily available, to the 1970s, when the disability rights movement became a force for significant change, Bogdan chronicles the evolution of disability image creation. Picturing Disability takes the reader beyond judging images as positive or slanderous to reveal how particular contexts generate specific emotions and lasting depictions."


Received an egalley for review from the publisher through NetGalley.

An absolutely fascinating book which though rather academic kept me spellbound and is an easy read.  This book deals with two topics I am most particularly interested in: 1) the treatment of the disabled in the early part of the 20th century and earlier and 2) unsettling or unique vintage photographs.  The author covers the periods from the 1860s to the 1970s, however, the majority of the photographs studied mainly fall between the 1880s and the 1930s.  The aspect that most drew me to this book and that I appreciated most was that the author investigates the photography of the disabled from the point of view of the purpose of the photographer and photograph within the era and society from which it comes.  There is no modern chastising.  The author warns in the Introduction that some people may find his treatise offensive because of this, but that is far from the intentions of his sociological intentions.  I found the book entirely engrossing since I am interested in the field.

The book is divided into chapters concentrating on one type/genre of photograph each.  Starting off with circus sideshow promotional photographs and beggar cards, while most insensitive by today's standards these are also some of the most controlled by the subject of the photograph as they more often than not were in charge of their own publicity.  The most disturbing chapters for me were the one on medical text photography (often eugenics texts), photographs from inside mental institutions and most surprisingly "art" photos which turn a person's deformities, pain, anguish into "art" to be critiqued for light, shadow, composition, etc.  The author even discusses the modern use of disabled people as featured in faked "natural" settings vs the truly natural family album photograph where the disabled friend or family member is included in a manner that does not call attention to their disability.  I enjoyed the book immensely!  The book is extremely readable and engrossing for anyone interested in or studying the topic.
Labels: 2012 mental illness non-fiction