96. Woe To Live On by Daniel Woodrell. 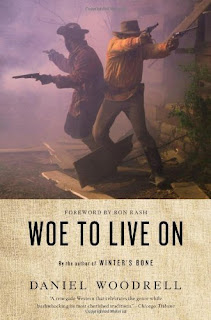 Woe To Live On by Daniel Woodrell. Foreword by Ron Rash

"Set in the border states of Kansas and Missouri, WOE TO LIVE ON explores the nature of lawlessness and violence, friendship and loyalty, through the eyes of young recruit Jake Roedel. Where he and his fellow First Kansas Irregulars go, no one is safe, no one can be neutral. Roedel grows up fast, experiencing a brutal parody of war without standards or mercy. But as friends fall and families flee, he questions his loyalties and becomes an outsider even to those who have become outlaws."

I hadn't planned on reading any Civil War books this year but I am reading all of Woodrell's works and have had this on order with my library for close to a year now.  So it was a welcome surprise when it showed up with my library holds!  While this is an historical fiction Civil War book it is like none I've ever read before, nor expect to ever read again.  Not so much a story of the war itself as it is of a small group of southern men fighting independently as raiders, most are from southern states, a few are from neutral states and one is a black man based on a real photograph of Quantrill's Raiders.  This story doesn't take anybody's side as being the right one, neither side is the courteous one.  Told from the southern point of view, these men and boys fight because they believe in their cause or because it's what they want to do.  As raiders they've chosen not to follow the rule of the military and are hard-knuckle folk who shoot to kill and raid for the rewards.  Fresh young Jake Roedel is the main character and the story is told through his eyes.  Jake learns to kill, lynch, shoot in the back, raid and pillage all because if he doesn't first, "they" will.  At some point he realises that "they", the Yanks, are no different than him in a human way but also no different in that if he doesn't shoot first he'll drop dead first.  There is no honour among killers.  The black man, Holt, plays a strange role in the story first belonging to one of the men but in an equal relationship with him and then actually befriending our young Jake.  The N-word is used superfluously until by the end of the book one has become desensitized to it.  There is blatant racial prejudice and at other times as Jake and Holt become friends, between them Holt will always be the n-, but it is as if it were left-handedness rather than race that makes them "different" in Jake's eye, but Holt himself knows his identity is bound up in his race even when it comes to friendship.  A very real book, written as if of the time period.  The author holds back on nothing never trying to appease political correctness, the south or the north.  The attitudes are all here as they were back in the 1860s.  A brutish, hard, difficult story that does not end without some redemption and hope for its characters.  A fine piece of writing.