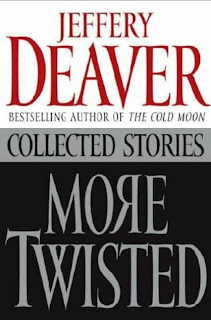 "New York Times bestselling author Jeffery Deaver, who crafted first-rate thrills in the collected stories of Twisted, presents sixteen more tales -- including an all-new Lincoln Rhyme entry -- spawned from his darkly brilliant imagination. From a stressed-out commuter to a death-row inmate, Deaver's characters are never what they seem -- and every jaw-dropping curveball he delivers is nothing less than "ingeniously devious" (People). "


Purchased and downloaded the Kindle edition onto my Kindle. .


I've read one Deaver novel, A Kathryn Dance one, which I enjoyed very much; and several of his short stories now.  I enjoyed most of these stories with them ranging from excellent to mediocre and, imho, most were good-very good.  My average rating comes to a 3.5 for the stories and I feel happy with that; just a bit better than good!  Deaver shows himself to be a good writer and the master of the twist ending.  He's been on my tbr list forever.  Perhaps next year I can devote some time to him.

1. Chapter and Verse - Good one!  I played right into the author's hands! A witness in protection is threatened before going to trial and the police try to figure out a clue left by a dead man.  I thought I'd figured it out right at the beginning and when the twist came I was proven right until the second twist that is!! Fun.  Great start. (4/5)

2. The Commuter - This starts off by telling us about a serial killer currently on the loose killing middle class men.  A wife is worried about her husband and then we follow his day to day life and end up watching it unravel in a tale of revenge.  Love how this just completely went in unexpected directions at ever turn.  (5/5)

3. The Westphalian Ring - An historical fiction piece set in Victorian London.  Not exactly a mystery but the tale of an accomplished burglar who suddenly finds himself under suspicion and how he races against time and the police, now using the latest investigative techniques, to avoid being caught.  I actually found myself getting a little bored in the middle as it seemed to be unravelling quite naturally, then, swish, there was the twist, and what a fun story it was.  Enjoyable. (4/5)

Note:  I am hoping some of these stories will start becoming scary or tense rather than just fun soon.

4. Surveillance - Similar to the previous story but modern.  A police officer is determined a certain man is the thief in a recent burglary and uses all the latest surveillance techniques to find proof.  At the same time the man uses his wits to get the police off his tail.  A cat and mouse chase.  The twist changed the story but wasn't very shocking. Just ok.  (3/5)

5. Born Bad - This is a mysterious story.  A mother gets a phone call from the daughter she hasn't seen or heard from in three years and nervously waits the 30 mins for her arrival.  Her thoughts turn to the past and we get the picture of a wild, disobedient girl, always trouble, who eventually ran off as soon as she was old enough to.  When the daughter arrives the scenario starts to unwind but in a new perspective.  Clever and fun. (4/5)

6. Interrogation - This is what I've been waiting for!  Days before his sentencing, a killer agrees to see a detective.  It has been planned that this man would do the final interrogation to try to find the motive for the man's apparent random act.  Once he thinks he has it all figured out, only then does the detective realise the killer has turned the tables on him.  Chilling!  (5/5)

7. Afraid - Whoa!  A tour de force! A woman is going away for the weekend with a man for the firs time whom she has been dating for about a month as he drives to their destination he starts using backroads and eventually enters a rundown part of the city.  Set in Florence, Italy.  Terrifying and creepy!  (5/5)

8. Double Jeopardy - Another great story!  This one is a bit different.  We see a defense attorney use his skills to play the system and get his (guilty) client off; this *is* what he is known for.  But this time he finds out that those who hired him are not who he thought they were and he gets played in the end.  Very clever and fun!  (5/5)

9. Tunnel Girl - A coed walking home one evening falls in a hole and an abandoned building collapses on her.  The story of her rescue is told from the man who owns the building across the way which city officials say has a connecting underground tunnel.  I could see the twist coming in this one but it was still a good story. (3/5)

10. Locard's Principle - At this point we have what is probably the piece de resistance for most of the author's fans: a Lincoln Rhyme novella. I haven't read any of this series yet but I have seen The Bone Collector movie.  I loved this story! A nice long story, the novella takes up the middle section of the book and has Rhyme on the case of a retired billionaire CEO turned philanthropist who was murdered in his bed.  Not only is the killer unknown to the reader but several other people's identities are left unidentified causing the ending to be quite exciting as everything is revealed in the last few pages.  Makes me want to get to this series even more than before.  (5/5)

11. A Dish Served Cold - Another fine example of mounting tension and psychosocial suspense.  When a when a wealthy man is made aware by the police that an attempt on his life is possibly in the works he doesn't know what to think.  A t first no too serious, but the police are protecting him with bodyguards and things begin to happen that are a bit too close for comfort.  Who could want him dead?  He's not a horrible person but he sure has done enough things to piss a lot of people off.  It could be any of them, or they could have paid someone to do it.  The police know who the hitman is but not who is behind it.  Then the story starts to slowly piece by piece fall apart and have the police been made to play the fool here?... Devilishly sneaky.  (5/5)

12. Copycat - Two girls have been murdered and a civilian notices that they mimic the crimes in a book written a while ago.  But it doesn't end their, previously, there were two other murders which have the same MO.  A reporter brings this coldcase to Detective Alltman and a wild ride follows as he unravels who the Greenville Strangler is.  Full of twists and turns and just when it's all sorted out Deaver throws in a final twist to completely shock you.  Loved it.  This one was more novella size as well.  (5/5)

13. The Voyeur - A man is watching a young woman in the next apartment building trying to figure out a way to actually meet her when he spies another man watching her from the bushes.  Well, this certainly had a twist and it totally surprised me with where it went.  I was a little disappointed though as it could have been pretty creepy but instead ended up being dark humour instead. (3/5)

14. The Poker Lesson - An 18yo joins a high stakes poker table.  One guy tries to take an other while the other has his own take on the go.  In the end the whole table is taken by a twist.  Surprise ending but way too much information about poker and gambling that I never had any interest in that it was quite boring at times.  (2.5/5)

15. Ninety-Eight Point Six - A man's car breaks down in the middle of nowhere and when he reaches the only house nearby to call AAA he encounters a couple who seem very strained with the tattooed young man with them.  The man get suspicious and the twist and turns keep rolling in this one!  Creepy and fun!  (5/5)

16. A Nice Place to Visit -  Starts out with a tourist in New York City and works its way down to petty thieves, crooks, scam artists, dirty cops, and killers.  Then someone is out for revenge and you won't believe who it is.  Quite intense, but not exactly twisted. (4/5)