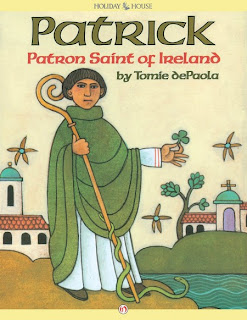 "The story of Patrick’s life, from his noble birth in Britain, to his being captured and taken to Ireland by a group of bandits, to the “dreams” that led him to convert the Irish people to the Christian faith. DePaola also retells several well-known legends, including the story of how Patrick got rid of all the snakes in Ireland. Full color."

Tomie dePaola is one of my favourite children's illustrators and I love the books he writes and illustrates, especially his Catholic books. There is really nothing else that can compare with them in pure quality and delight.  I've read this one before many times and it deserves a permanent place in any home library.  Not much is known about the real St. Patrick and dePaola starts off with telling us Patrick's life story as far as we know it factually.  It is a wonderful story of a young man who is captured and enslaved but through his love of God perseveres.  Upon escaping and returning home, he becomes a priest and eventually a bishop who feels called to go back to his place of enslavement, Ireland, to spread the Good News.  And this is Patrick's legacy as we know it, how he brought Christianity to Ireland.  Following this dePaola devotes a spread each to the common legends surrounding St. Patrick which may be true or may just be simple legends such as his driving the snakes out of Ireland, his use of the shamrock to explain the trinity, his floating on a stone across the sea, the light that shone from his fingers, and a few others.  A wonderful picture book and offered now for the first time in ebook format.