107. The Hypnotist by Lars Kepler. 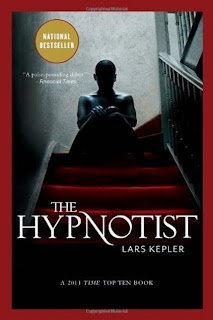 "Tumba, Sweden. A triple homicide, all of the victims from the same family, captivates Detective Inspector Joona Linna, who demands to investigate the grisly murders -- against the wishes of the national police. The killer is at large, and it appears that the elder sister of the family escaped the carnage; it seems only a matter of time until she, too, is murdered. But where can Linna begin? The only surviving witness is an intended victim -- the boy whose mother, father, and little sister were killed before his eyes. Whoever committed the crimes intended for this boy to die: he has suffered more than one hundred knife wounds and Lapsed into a state of shock. He's in no condition to be questioned. Desperate for information, Linna sees one mode of recourse: hypnotism. He enlists Dr. Erik Maria Bark to mesmerize the boy, hoping to discover the killer through his eyes. It's the sort of work that Bark had sworn he would never do again-ethically dubious and psychically scarring. When he breaks his promise and hypnotizes the victim, a Long and terrifying chain of events begins to unfurl."

Wow. Wow. Wow. Fantabulantanticous!!! First book in a new Swedish detective crime series has all the ingredients for a major high stakes serial killer thriller mystery story.  There are so many related storylines and plots in this horrifying crime that one never knows where the next thing will come from.  At first the book seems to be going in the ordinary way of any ordinary mystery and a perp. has been found but... what? only 1/4 of the way into the book... what could possibly happen next?  Kepler has oh so much more in store that it is page-turningly impossible to keep up with him.  I adored his use of being in the past switching to the present then going back into the immediate past, back and forth until a certain part of the book we need to be immersed into a time period ten years earlier to learn the background that is connected to this present state of affairs.  The author manipulates both the multiple time scene changes and multiple cast members with dexterity, never once leaving me feeling dangling.  I had a firm grip the whole time and was on the edge of my seat literally from paragraph one.  It is hard to tell who the main characters that will follow over into the next volume will be though.  Of course DI Joona Linna, but we don't get to know him very well, in this book.  We do get to know Dr. Erik Bark much more personally but was he just around for this event or will he be a recurring character.  I'd like to see his return.  Guess I'll find out soon as "The Nightmare" is coming up soon on my bedtime table. Highly recommended for Scandi-crime fans!