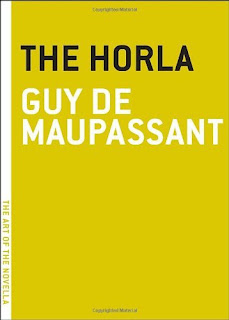 The Horla by Guy De Maupassant. Translated by Charlotte Mandell
The Art of the Novella

"This chilling tale of one man’s descent into madness was published shortly before the author was institutionalized for insanity, and so, The Horla has inevitably been seen as informed by Guy de Maupassant’s mental illness. While such speculation is murky, it is clear that de Maupassant—hailed alongside Chekhov as father of the short story—was at the peak of his powers in this innovative precursor of first-person psychological fiction. Indeed, he worked for years on The Horla’s themes and form, first drafting it as “Letter from a Madman,” then telling it from a doctor’s point of view, before finally releasing the terrified protagonist to speak for himself in its devastating final version. In a brilliant new translation, all three versions appear here as a single volume for the first time."


Purchased a copy on subscription from Melville House.

The Horla - 1887 (final version) -  Fantastic piece of Gothic horror!  I've read Maupassant before but this is my first time reading this story.  A series of journal entries as a man tells how he is not feeling well.  He takes various vacations, feels better but his illness always returns when he gets back home.  He starts to believe he is going mad as his physical ailments lead to hallucinations and eventually he muses upon whether he is a rational man having hallucinations or simply a madman.  However, things take a different turn when he believes his hallucination may be real and perhaps his problem is a being not of this plane.  A perfectly paced example of the Victorian Gothic.

Letter From a Madman - 1885 (first draft published under a pen name) - This is a mere 10 pages compared to the over 40 of the final story and is only a hint of what would become "The Horla".  A man writes a letter to a doctor asking him to be put away in the madhouse and then explains what he has been suffering.  Starting out as an essay on the five senses and then going on to the man's hallucinations of experiencing the missing senses, this is not a particularly exciting short story though it does end on a creepy note.  There are a lot of scenes and ideas that have been used in the final story "The Horla".  One can see how this story must have left the author feeling there was much more that could be told from the basic idea he had presented here.

The Horla - 1886 (first version) - Not the novella of the final version but a much longer short story than the "Letter..."  A good story which I quite enjoyed and would have been satisfied with giving a 4*, but having read the final version see how the story lacks its haunting Gothic creepiness.  For this version a doctor invites colleagues over to hear his patient's story; which the patient then proceeds to recount.  First off with this set up, we know the "madman's" fate from the beginning which is unknown in the final version and part of the pacing.  The story does now contain all the same elements and events that will fill the final story but since the patient is telling a story which has happened in the past it does not have the same eeriness as the final story which is told in real time journal entries.

Altogether a wonderful experience reading the progress of an idea into a brilliant novella.  Even though I enjoyed the first story (the final version) the most, the whole reading experience was a 5* event!