101. Jungleland: A Mysterious Lost City, a WWII Spy, and a True Story of Deadly Adventure by Christopher S. Stewart 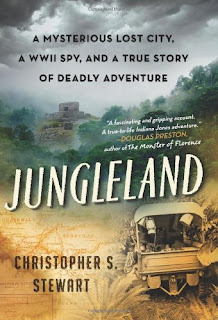 Jungleland: A Mysterious Lost City, a WWII Spy, and a True Story of Deadly Adventure by Christopher S. Stewart

Received an egalley through from the publisher through Edelweiss.

""I began to daydream about the jungle...."
On April 6, 1940, explorer and future World War II spy Theodore Morde (who would one day attempt to assassinate Adolf Hitler), anxious about the perilous journey that lay ahead of him, struggled to fall asleep at the Paris Hotel in La Ceiba, Honduras.

Nearly seventy years later, in the same hotel, acclaimed journalist Christopher S. Stewart wonders what he's gotten himself into. Stewart and Morde seek the same answer on their quests: the solution to the riddle of the whereabouts of Ciudad Blanca, buried somewhere deep in the rain forest on the Mosquito Coast. Imagining an immense and immaculate El Dorado–like city made entirely of gold, explorers as far back as the Spanish conquistador Hernán Cortés have tried to find the fabled White City. Others have gone looking for tall white cliffs and gigantic stone temples—no one found a trace.
Legends, like the jungle, are dense and captivating. Many have sought their fortune or fame down the Río Patuca—from Christopher Columbus to present-day college professors—and many have died or disappeared. What begins as a passing interest slowly turns into an obsession as Stewart pieces together the whirlwind life and mysterious death of Morde, a man who had sailed around the world five times before he was thirty and claimed to have discovered what he called the Lost City of the Monkey God.

Armed with Morde's personal notebooks and the enigmatic coordinates etched on his well-worn walking stick, Stewart sets out to test the jungle himself—and to test himself in the jungle. As we follow the parallel journeys of Morde and Stewart, the ultimate destination morphs with their every twist and turn. Are they walking in circles? Or are they running from their own shadows? Jungleland is part detective story, part classic tale of man versus wild in the tradition of The Lost City of Z and Lost in Shangri-La. A story of young fatherhood as well as the timeless call of adventure, this is an epic search for answers in a place where nothing is guaranteed, least of all survival."


A modern day reenactment of an old explorer's search for a lost city in the same vein as David Grann's The Lost City of Z but not of the same calibre as that book.  Christopher Stewart follows in the footsteps of Theodore Morde who explored Honduras during the late 1930s looking for the fabled "White City".  Chapters alternate between telling Morde's story and Stewart's.  Morde's story comes from extensive diaries he kept during his expedition and life.  An entertaining story, well-written and an enjoyable read.  The title of the book is a bit of a misnomer mentioning the WWII Spy bit as Morde did go on to do this after his exploration but this occupies only about two chapters of the book near the end.  The book is about explorers, exploration, and lost civilizations, not wartime espionage.  While the tale is a captivating read for those who enjoy jungle exploration, nothing much of actual note really happens.  Neither Morde nor Stewart faced any unusual or unique dangers nor enthralling experiences.  I enjoyed Morde's story the most.  Stewart I found hard to like from the get-go.  Here is a married man, father of a three-year old child who picks up and takes off for the jungle, a potentially life threatening action, for purely selfish reasons, trying to "find himself", etc. mostly against his wife's wishes though she doesn't make much fuss according to the author.  I just found him an unlikeable, immature person and though he laments what he's done and "grows" through the experience, I found myself thinking about his poor wife and daughter left worrying about him back home while he basically traipsed around on this fool's errand.  So, an interesting story but mostly for the historical aspect of Theodore Morde's story, in my opinion.  I would have preferred a book just about Morde and not the author and his ego.