75. The Bedlam Detective by Stephen Gallagher 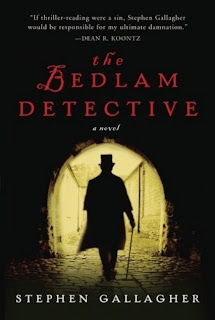 The Bedlam Detective by Stephen Gallagher

"From a basement office in London’s notorious Bethlehem Hospital, former policeman and Pinkerton agent Sebastian Becker is sent to interview Sir Owain Lancaster at his country estate. They wealthy industrialist returned alone from a disastrous scientific adventure in the Amazon, claiming that wild beasts killed his family and colleagues. He tells Becker that the same dark creatures have followed him home and are responsible for the deaths of two local girls and rumors of beasts on the moor. But while madmen may see monsters, some monsters hide in plain sight."

Madness, insane asylums and post-Victorian London; three things that have me salivating to read a book!  The Bedlam Detective was no disappointment.  A crossover between historical fiction and mystery, this book is more on the literary side to please those looking for historical/mystery rather than mystery/thriller.  While I didn't find it a page turning read, I did find it an engrossing read with a clever mystery at its centre.  Essentially a story of madness, as encountered in the post-Victorian era I found the plot fascinating along with the added element of the Victorian explorer I couldn't have been happier to find most of my favourite themes in one book.  Well-written, an excellent period piece that mentions famous names but doesn't include any as main characters.  I found myself doing a bit of research mid-read as I first heard mention of John Langdon Down, who turned out to be the physician Down's Syndrome is named after.  While the serial killer aspect is not the main theme of the book it is kept afloat well and has a very surprising conclusion as all plot elements come to a head at the end of the book.  A most enjoyable tale in one of my favourite genres.  This is my first read by the author who has written many books; I will have to check out his backlist.
Labels: 2013 historical fiction mental illness mystery Victorian