72. The Devil by Leo Tolstoy 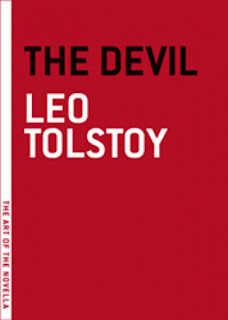 The Devil by Leo Tolstoy. Translated by Louise and Aylmer Maude. (4/5)
The Art of the Novella series

"Leo Tolstoy is known for epic novels that brilliantly dissect society, but the novella The Devil may be the most personally revealing—and startling—fiction he ever wrote. He thought it so scandalous, in fact, that he hid the manuscript in the upholstery of a chair in his office so his wife wouldn’t find it, and he would never allow it to be published in his lifetime.

Perhaps that’s because the gripping tale of an aristocratic landowner slowly overcome with unrelenting sexual desire for one of the peasants on his estate was strikingly similar to an affair Tolstoy himself had. Regardless, the tale—presented here with the two separate endings Tolstoy couldn’t decide between—is a scintillating study of sexual attraction and human obsession."


An entertaining, though overdramatic, tale of a man's fight against lust.  The devil referred to in the title is openly described as the woman the man lusts after but it is apparent that the temptation of lust itself is the actual "devil" of the title.  While the story is overdramatic in its telling by modern standard's and the actions of the female characters very stereotypical, it is typical of writing from this period.   I certainly enjoyed the story and it has whetted my appetite for more Tolstoy.  As to the author hiding this from his wife, I don't think it had anything to do with the story's sexual nature but rather that the main character contemplates killing his wife and due to the biographical nature of the story *that* may have been what he didn't want her to see. LOL.  I really appreciated being able to read both endings which end up exactly in the same place but get there differently.  Personally, I prefer the first one.
Labels: 1889 2004 classic novella short stories