66. The Enchanted Wanderer by Nikolai Leskov 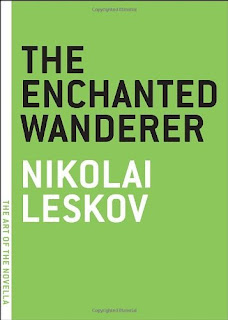 The Enchanted Wanderer by Nikolai Leskov. Translated by Ian Dreiblatt (3.5/5)
Art of the Novella series

"The Enchanted Wanderer is a Russian Candide with a revolutionary edge, a picaresque that features a fast-talking monk named Ivan who is at war, it seems, with every level of society. Working as a carriage man for a Count, Ivan accidentally causes the death of a monk, which leads to his being ostracized by the local peasantry . . . until the dead monk returns as a ghost to guide him through trouble upon trouble."


This month I received two books of Russian literature and decided to start with this one as compared to the other novellas I've been reading it is a veritable tome at 210 pages.  Which I guess is appropriate for a novella of Russian Lit when you think of the average length of a Russian novel. LOL  I haven't read any classic Russian works unless you count Doctor Zhivago and modern 20th century authors, but I have read many short stories such as Tolstoy and Chekhov.  This was an entirely new piece to me.  I found myself likening it to  Don Quixote with the man's outlandish experiences as he wanders across his countryside, perhaps mad, perhaps making it up, perhaps telling the truth.  On the other hand I would liken it in a way to the tale of Job.  A man who must suffer the tribulations given to him by God.  Ivan kills a monk and the monk's spirit comes back and tells him that his life will be full of hardships leading up to near-death experiences but he will not ever die no matter how bad things get and this will continue his whole life until he accepts his destiny to answer the call of God and become a monk himself.  The book follows Ivan's life from young adulthood to old age as he goes from one escapade to another sometimes he merely suffers a beating other times he survives circumstances that should have been the death of anyone else.  As I read the book I couldn't decide whether I liked it or not; it was an on again off again affair with me.  There were parts that I found dragged.  The sheer amount of events that happen in this short book is enormous giving it a very fast pace which leaves one forgetting what happened previously.  But at other times I was caught up in Ivan's story and whether he was exaggerating or telling the truth I didn't really care; the tales had a captivating fairy tale quality to them I truly enjoyed while the writing flowed beautifully.  An enjoyable read that has whetted my appetite for more Russian works and I look forward to the next book this month.