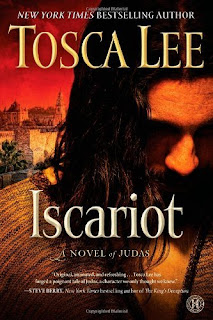 "Based on extensive research into the life and times of Judas Iscariot, this triumph of fiction storytelling by the author of Havah: The Story of Eve revisits one of biblical history’s most maligned figures and brings the world he inhabited vividly to life.
In Jesus, Judas believes he has found the One—the promised Messiah and future king of the Jews, destined to overthrow Roman rule. Galvanized, he joins the Nazarene’s followers, ready to enact the change he has waited for all his life. But soon Judas’s vision of a nation free from Rome is crushed by the inexplicable actions of the Nazarene himself, who will not bow to social or religious convention—who seems, in the end, to even turn against his own people. At last, Judas must confront the fact that the master he loves is not the liberator he hoped for, but a man bent on a drastically different agenda.
Iscariot is the story of Judas, from his tumultuous childhood to his emergence as the man known to the world as the betrayer of Jesus. But even more, it is a singular and surprising view into the life of Jesus that forces us to reexamine everything we thought we knew about the most famous—and infamous—religious icons in history."


One of he last people in the world we would want to feel sympathy for is Judas Iscariot but Tosca Lee has written a beautiful story of biblical times and what Judas' life might have been like prior to meeting Jesus, what his hopes and dreams were of a coming Messiah and how in a moment of weakness he lets his disappointment lead him into betrayal.  This is Judas' story from his own point of view but it is also the story of Jesus from the point of view of a devout Jew who followed the Pharisees before he met Jesus.  It is an entertaining story and had me from the first chapter.  I read the book quickly over a couple of days and was very much taken with the vivid portrayal of ancient life at the time of Jesus and the political turmoil that was going on between the Romans and the Jews themselves when God sent his Son to save us from our sins.  I enjoyed Tosca's writing and was held spellbound throughout my reading.  The author's research is obvious.  Many references from Gospel are accounted but one must remember that this is fiction.  Lee is fitting her story into the Gospel truth that exists which does not in turn make her fictional story true.  On the level of fiction I really enjoyed the story and how she made Judas a sympathetic person who was a victim of his times and confused to what the truth really was.  I enjoyed this presentation but could not completely fall under its spell as knowing my Gospel I know that Jesus cursed Judas for betraying him as He knew what was going to happen in the end anyway.  This is included in the story but it comes early on as coming from Judas`own mind.  As a Catholic, the only problem I had with the book theologically was one scene where Jesus is supposed to have an elder brother (he had no siblings at all let alone an elder) and his mother is in this scene too and portrayed very weakly.  It is disturbing to see Our Lady treated so unworthily in this and one other scene near the end of the book.  But for pure good story and an interesting look into a familiar story from a unique point of view I`d highly recommend the book, only emphasizing one to remember it is fiction even though based on fact.